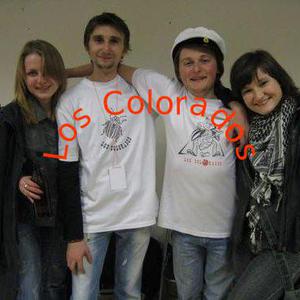 It was three of them: Ruslan Prystupnic Prystupa (lead vocals), Rostyslav Roslyk Fook (guitar, backing vocals), Serhiy Masyanya Masyk (bass guitar, backing vocals). They were working at the same office in Ternopil. Each of them had some experience in making music in different bands. Once they decided to play for fun and make a great song Pomidory (Tomatoes). After that boys realized, that the new band was started.

It was hard to play rock music without drums, so a new member of group appeared Oleksandr Guns Davosyr. They recorded their first single Pomidory. After that boys invited one more member Vitaliy Luka Shostak for rhythm guitar. The new band was asked to play at the concerts of local rock club. When they came up on the stage, they called themselves Los Colorados. It happened on 24th April in 2006, so this day considered as the birthday of the band. Soon Los Colorados became popular among the youth of Ternopil district. The boys were invited to other towns to play in local clubs, open air concerts, music festivals. The most popular songs were Chorna lubov (Black Love), Tyotya Lyuba (Aunt Lyuba), Nenavyzhu pianino (Hate the piano), Rillya v ilyuminatori (Tillage in the window) etc. Their style was called agri-alco-rock because of their lyrics (its about agricultural work, peasants life) and live show (every show boys drink some alcohol on the stage). Every song has some extract from the popular foreign song, its some kind of game with audience. In 2008 Los Colorados took part in annual music festival Nivroku, where they played with famous from You Tube Ukrainian Petro Shchur. That was the last show in such a staff. After that Guns and Luka left the band.

Later, in 2008 Oleksandr Lesyk Drachuk (drums, backing vocals) joined the group. Once, musicians gave an interview on a local Ternopil channel SmileTV and tried to surprise their fans. They played acoustic staff and made some covers for the popular songs (Katy Perry Hotncold, Peter Nalich Guitar etc.) Nobody expect that, after posting this video on You Tube boys became very popular all around the world. Acoustic staff gave the new possibilities for this band. Now Los Colorados have lots of concerts, mostly in Lviv. At the moment they are working on their first album.