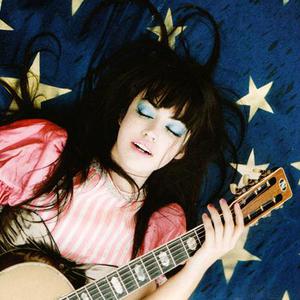 There is more than one artist with this name: 1) Aura Dione is a female Danish Indie/Folk/Pop singer. www.myspace.com/auradione http://www.last.fm/music/Aura%2520Dione?ac=Aura Having a French/Faroese mother, and a Danish/Spanish father, who were both music lovers, Aura has written music since the age of 8. After having lived on the small island of Bornholm, she moved to Australia when she was 17.

1) Aura Dione is a female Danish Indie/Folk/Pop singer. www.myspace.com/auradione http://www.last.fm/music/Aura%2520Dione?ac=Aura
Having a French/Faroese mother, and a Danish/Spanish father, who were both music lovers, Aura has written music since the age of 8. After having lived on the small island of Bornholm, she moved to Australia when she was 17. There she played music with the Aboriginals, an experience that changed her attitude on towards creating music. In 2008 she released her first full album called "Columbine", that were produced in collaboration with some of Denmark's best producers, and which were received with good reviews by the critics.

2) Aura is a trance group from Sweden whose popularity was launched with the original MP3.com service, where all of their music was hosted and could be downloaded for free. Their music regularly was at the top of the most downloaded songs on the techno and trance lists. Their most popular singles included "Destination Skyline" and "Intercity". Their music can be found and downloaded at their official website, http://www.AuraTrance.com


6) Aura is a Danish Dark-Ambient artist. Aura's debut EP "In The Darkest Hour Of Ativan Dynasty" was finished in late 2006.


7) Aura is a Belarussian musical project started by Eugene Oleynik and his wife Julia Bykova, in 2006. Eugene is both the composer and the producer; Julia writes lyrics and provides vocals on Aura songs. Aura has 3 studio tracks: "Whisper of silence", "Have you ever" and "Nochchu na Kupalle" (duo with american rapper Doobie). You can listen to all these tracks on Aura official web page http://www.aura.by


9) Aura is an Indonesian jazz singer.

12) Aura is a Norwegian alternative country rock band respectively from Austrheim and Rad?y.

13) Aura was a Polish jazz fusion/jazz rock band, popular in the late 1970s and early 1980s. They were heavily influenced by funk and disco, even recording a Polish-language cover of The Bee Gee's "Stayin' Alive" (Z Nami Si? Baw).

14) Aura is an original hard rock band from Chattanooga, TN. Currently a trio, Steven Hopkins (guitar), Landon Garry (bass), Evan Garry (drums), Aura has been playing together for almost five years. They are currently seeking a vocalist and a second guitarist.

16) Aura is a Italian Progressive Metal band from Sapri, Campania formed in 1996.
http://www.myspace.com/auraonline

17) AURA, Artistes Unis pour le Rap Africain (United Artists for African Rap), is a group of West African artists who have united together in order to use their musical talents to promote Children's Rights and the development of Africa.

AURA was created in February 2005 following a meeting of high profile African musicians in Dakar, Senegal. The project's creation was supported by the NGO Plan International and Plan continues to support the work both financially and assisting in the organisation of concerts and training workshops.

The AURA network currently consists of artists from the following countries:

The AURA network plans to open itself up to rappers from other countries, particularly Anglophone ones.

A Different View From The Same Side

The Source Of Trance