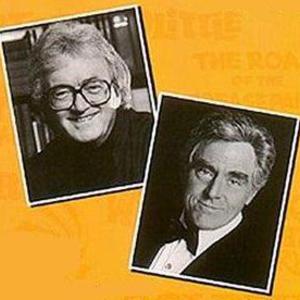 The partnership of Anthony Newley and Leslie Bricusse have produced some critically acclaimed and award winning work including: Stop the World - I Want to Get Off, The Roar of the Greasepaint ? the Smell of the Crowd, Willy Wonka and the Chocolate Factory, & The Good Old Bad Old Days. George Anthony Newley (born on September 24, 1931 in the London Borough of Hackney; died on April 14, 1999) was an English actor, singer and songwriter.

George Anthony Newley (born on September 24, 1931 in the London Borough of Hackney; died on April 14, 1999) was an English actor, singer and songwriter. A graduate of the Italia Conti Academy stage school, his first major film role was as the Artful Dodger in David Lean's 1948 rendition of Oliver Twist, the classic Charles Dickens tome.

Newley had a successful pop music career, with two number one hits in 1960: "Why?" and "Do You Mind?" He won the 1963 Grammy Award for Song of the Year for "What Kind of Fool Am I", but he was also well-known for "Gonna Build a Mountain" and comic novelty songs such as his version of "Strawberry Fair". He wrote songs that others made hits including Goldfinger (the title song of the James Bond movie), and Feeling Good, which became a hit for Nina Simone. With Leslie Bricusse, he wrote the musical Stop the World - I Want to Get Off in which he also performed, earning a nomination for a Tony Award for Best Leading Actor in a Musical. His other musicals included The Roar of the Greasepaint?the Smell of the Crowd (1965) and Willy Wonka and the Chocolate Factory (1971), based on the children's book by Roald Dahl. The play was released in a film version in 1971.

Newley's vocal style has been recognised as a major influence on that of David Bowie. In recognition of his creative skills and body of work, Newley was elected to the Songwriters Hall of Fame in 1989.

The shortlived 1960 ATV series The Strange World of Gurney Slade in which Newley starred, continues to have a cult following due to its postmodern premise that the Newley character is trapped inside a television programme. Apart from a repeat of one episode on Channel 4 in 1992, it has not been seen in the UK in recent years. The show's theme tune by Max Harris may be better-known today than the series itself.

His last feature role in the cast of EastEnders was to be a regular role, but Newley had to withdraw after a few months when his health began to fail.

Leslie Bricusse (born 29 January 1931) is a British lyricist. Although best known for his partnership with Anthony Newley, Bricusse has worked with many other composers. He was Secretary of Footlights between 1952 and 1953 and Footlights President during the following year.

Stop the World - I Want to Get Off was a musical which opened at the Queen's Theatre, London on 20 July 1961, and ran for 555 performances. The book, lyrics & music were by Leslie Bricusse and Anthony Newley. Anthony Newley also played the lead, a little man in a clown's guise always defeated by circumstances. He was supported by Anna Quayle as the women in his life. Only three songs became popular: "I'm Gonna Build a Mountain," "Once in a Lifetime," and "What Kind of Fool am I." Future West End star Marti Webb was part of the chorus.

The Roar of the Greasepaint?the Smell of the Crowd was a follow up musical play to Leslie Bricusse & Anthony Newley's Stop the World - I Want to Get Off. It floundered in Britain with the comedian Norman Wisdom as the lead, but was more successful on Broadway with Anthony Newley. The plot was allegorical in nature, pitting Cocky, the little man who always plays by the rules, against Sir, who goes his own way, ignoring the rules. Newley played Cocky, while Sir was played on Broadway by Cyril Ritchard.

The Roar of the Greasepaint?the Smell of the Crowd opened at the Shubert Treatre on 16 May 1965 and ran for 232 performances.

The song "Who Can I Turn To" became popular at the time, and in addition to Newley was recorded by Tony Bennett. Other songs were recorded by Sammy Davis Jr.. "Feeling Good" has been covered by a number of artists, including Nina Simone, Muse, Michael Bubl? and most recently The Pussycat Dolls.