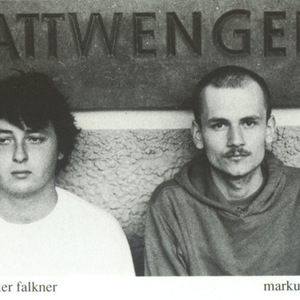 Attwenger (formed 1990) is a musical duo from Linz, Austria. The name Attwenger comes from an old four-lined stanza, that was played in regional broadcast. Markus Binder plays drums, Hans-Peter Falkner the accordion (electric squeeze-box). Both also sing and use electronic effects and instruments. Attwenger is considered one of the most innovative bands in Austria and fuses elements of folk with punk, rock, hip-hop and electro.

Their first LP "most" was released in early 1991. Many concerts followed in german speaking areas as well as in Marseille, Amsterdam, Brussels, London, Kuala Lumpur and Harare. "pflug" and "luft" were released in 1992 and 1993. Each were voted album of the year in Austria. After finishing the 35mm "Attwengerfilm" and a tour through Sibiria Attwenger returned in the fall of 1996 to develop new pieces. The new work was released in 1997 on the album "song". After concerts in Ho-Chi-Minh-City/Vietnam (1998) and Lahore/Pakistan (2001) (among others) the fifth album, "sun", was released, in which followed the 2002 interpretation of the attwengeresque concept of dialect and sound. After touring with the sun-tracks (also through mexico), Attwenger produced their next album ?dog?, representing 14 slim electro- and polka-slang-songs, setting off for various directions (release: october 2005). Half a year later, in spring 2006, 17 remixes of this album followed with ?dog 2?.

"I have no idea what it's all about, but I like the general noise a great deal."
(John Peel about Attwenger)