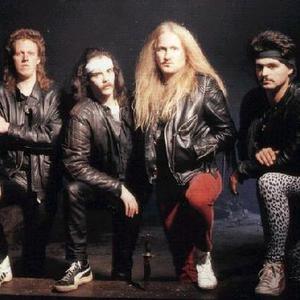 There are at least five bands named Attack. The first is a Heavy Metal band from Germany. The second is czech Nationalist Rock Against Communism Band . The third is a 80's Hair Metal Band from Sweden, The fourth is a psychedelic 60's band. The fifth is a hatecore band from USA. The story of The Attack was an undeniably complex affair, bad luck, an unstable line-up and a broken promises didn't help for a band with such a short life span consisting of only 4 singles. Richard Shirman: "I was in a group called THE SOUL SYSTEM, a rhythm and blues outfit.

The first is a Heavy Metal band from Germany.
The second is czech Nationalist Rock Against Communism Band .
The third is a 80's Hair Metal Band from Sweden,
The fourth is a psychedelic 60's band.
The fifth is a hatecore band from USA.

The story of The Attack was an undeniably complex affair, bad luck, an unstable line-up and a broken promises didn't help for a band with such a short life span consisting of only 4 singles. Richard Shirman: "I was in a group called THE SOUL SYSTEM, a rhythm and blues outfit. The leader of THE SOUL SYSTEM was Bob Taylor, an excellent guitarist, who went on to join THE DOWNLINER SECT, ELMER GANTRY'S VELVET OPERA and also played on a few studio things for THE PRETTY THINGS. I was obliged to help my mother with the shopping on Saturdays and, whilst queuing up at one of the counters in Sainsbury's in the Earls Court road I got chatting to the guy who, it turned out, played trumpet and a bit of guitar ( DAVY O'LIST). He only lived round the corner so the two arranged for a meeting. Armed with records we got chatting and I introduced him to the club scene and we became good mates. I also introduced him to the guys in the SOUL SYSTEM, which he eventually joined. Being full of our own importance, we decided to form our own group playing different stuff to THE SOUL SYSTEM. He then told me of this Scottish chap (who worked at Sainsbury's full time, Gerry Henderson , who played clarinet on 'Hi Ho Silver Lining' ) and a bit of bass (and how !). Bob Hodges (Hammond organ) and Alan ' Noddy ' Whitehead (drums) replied through adverts we placed in MELODY MAKER." Luckily they were spotted by Decca towards the end of the year and were hauled into the studio for the release of their debut single, a cover of The Standells 'Try It'. The song, also covered by The Ohio Express was a fine effort and really deserved much more. At this point, Alan Whitehead quit to team-up with the Marmalade with Barny Barnfield stepping into the drum seat. Their troubles began with the release of the second 45, 'Hi Ho Silver Lining', Richard : "Our manager & Record company man, Don Arden, got an acetate of the song which had been written by Scott English (an ex singer from the Four Seasons) and told us that this was to be our single. We recorded it (producer, Mark Wildey, studio - Decca No. and, in the half an hour that remained, Dave took the guys and ran a riff and chords he had in mind whilst I wrote some lyrics and hummed them along ! Thus ' Anymore Than I Do '. Don had all the pirates lined up but (this is unsubstantiated) Micky Most had someone at Decca studio in his pocket and they passed him the song / demo. Our first pressing went and, due to the Stones, Tom Jones and Englebert Humperdink all having singles out they were flat out and didn't press The Attack, though demand was there. Two weeks later, Jeff's version came out, he got Top of the Pops and the rest is, as they say, HISTORY !" On hindsight, it's a shame they didn't use, 'Anymore Than I Do', a fine song complete with blistering guitar work from O'List of which John Peel even used this on his pirate Radio London jingles. O'List however quit for pastures new with The Nice shortly after this. Brian Davidson was drafted in on drums before he left to join O'List at The Nice. After various line-up changes the third single appeared, 'Created By Clive', based on the atmosphere of Kings Road circa 1967 with a full Kinks 'Dedicated Follower Of fashion' mood song. The song must have had an impression on Decca who gave it to subsidiary label Deram for a release bThe Attacky The Syn. Both songs were released at the same time getting the buying public into confusion and inevidently they both cancelled each other out. The flip 'Colours Of My Mind' contained some unusual Eastern guitar playing. Around this time guitarist John Ducann joined and 'Magic In The Air' was due to be the new single however this was rejected for being too heavy and was replaced by the excellent 'Neville Thumbcatch', telling the story of a man and his allotment whilst the flip 'Lady Orange Peel' caught The Attack at possible their strangest and again the single failed. Rumours were that Decca persuaded the group to record a full album under the working title of 'Roman Gods Of War'. The music press gave out news of a release date, scheduled for release on 15 March 1968. Richard : "Roman Gods of War' was a prospective title of a song that Keith Hodge - drummer - was alleged to be writing and, if it was used as a working title may have some air of veracity about it. However, I wasn't aware that there were any definite plans to release an album so all talk of titles strikes me as being slightly superfluous !". A final single 'Feel Like Flying' / 'Freedom For You' never appeared and The Attack effectively ended. In 1968 DuCann worked on a one-off album 'The Five Day Week Straw People' released on the low-budget Saga label before forming Andromeda who even did a reworking of The Attack's Go Your Way for their first single. It took over 20 years for the story to re-open. In 1992 a bootleg appeared on the Reflection label, 'Magic In The Air', a compilation of the singles and some previously unreleased tracks. This was followed up with Angel Air's Final Daze and in 2006 RPM issued "About Time" which included some BBC session material.

Up In The Sky

Seven Years In The Past

Return Of The Evil

Danger In The Air