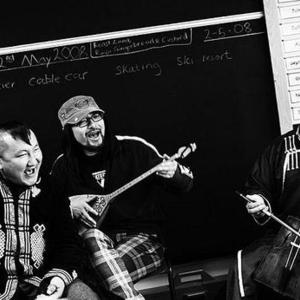 Hanggai is a Chinese folk music group from Beijing who specialize in a blend of Mongolian folk music and more modern styles such as punk rock. Hanggai is made up of young musicians from Beijing and from the Inner Mongolia Mongol Autonomous Region in modern day People's Republic of China. Satisfying the demand for the romanticized and mysticized Mongolian music in China, Hanggai presents Mongolian folk songs in conjunction with western and Chinese influenced drumming and other techniques (albeit with some sacrifice to lyrical clarity)...

Hanggai is made up of young musicians from Beijing and from the Inner Mongolia Mongol Autonomous Region in modern day People's Republic of China. Satisfying the demand for the romanticized and mysticized Mongolian music in China, Hanggai presents Mongolian folk songs in conjunction with western and Chinese influenced drumming and other techniques (albeit with some sacrifice to lyrical clarity), hence makes the traditional Mongolian art more comprehensible to foreigners in China and the west.

Hanggai's leader, Ilchi, was fronting a punk band until he experienced a conversion after hearing traditional overtone singing. He travelled to his father's homeland of Inner Mongolia and started to learn the technique ? rediscovering the music and the repertoire of songs that had faded but not disappeared during China's turbulent past. There he met Hugejiltu and Bagen, both music students, who joined the group. Hugejiltu plays lead fiddle and Bagen sings deep bass using a technique of overtone singing, producing a note one octave below the note he is singing.

The songs on the album are adaptations of traditional songs from the grasslands, sung in Mongolian, many using hoomei, a throat-singing technique that has been handed down over hundreds of years. At the heart of the music are two traditional instruments ? the morin khuur ? the horse-hair fiddle and the tobshuur ? a strummed two-stringed lute.

Some of the arrangements sound very simply traditional and others are more complex. ?Five Heroes', a song of vigilantes stealing from the rich and giving to the poor, includes jangly electric guitar, conjuring up cowboy movies ? creating a connection between east and west. ?Wuji' is predominantly throatsinging, with the strong repetitive sound of the horsehair fiddle pushing the song forward. ?Lullaby' (Borulai) is a gorgeous mix of vocal harmonies ? the familiar feel of a gentle lullaby with a strong atmosphere of the grasslands.
The penultimate track, ?Drinking Song', recorded during a drunken evening and spliced together in the studio, hits the spot. ?Let our song never end, let our fortunes never decline, a cup for ever in our hands, a song for ever in our throats.'"

Their "Introducing Hanggai" album on the World Music Network got an excellent (8.0/10.0)
review in Pitchfork.

Excerpts from other reviews;

?distills everything powerful about Mongolian folk music and makes something new from the ingredients?transcendently powerful music that anyone from anywhere can understand.? PITCHFORK

?so entrancing or just downright enthralling that I just can't imagine why the tradition ever fell out of fashion? charming, raucous, brilliantly jubilant and a breath of fresh Mongolian grassland.? World Music Central

"Hanggai have made the leap from folk phenomenon to crossover pioneers without losing their soul. Built from -- and meant for -- Mongolia's wide open spaces, this music will make you homesick for a place you've never been." Rhapsody

"Their debut album is a delight...'Flowers' is country and eastern, while 'Haar Hu' could be the grassland's 'Scarborough Fair'. While Beijing busts a vulgar gut to Westernise, Hanggai update tradition with elegance." Observer

Their second album proper, He Who Travels Far was released in 2010.

On their YouTube channel they are running a THROAT SINGING CONTEST.

He Who Travels Far