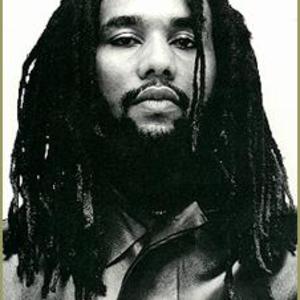 Ky-Mani Marley (born February 26, 1976, in Falmouth, Jamaica) is a Jamaican actor and reggae musician. He is the son of singer Bob Marley and table tennis champion Anita Belnavis, and the half-brother of Ziggy Marley. Marley's first appearance as musician took place in 1996 when he recorded Like Father Like Son, an album consisting of cover versions of some of his father's songs. His next album, 1999's "The Journey", received mass critical acclaim, and achieved relatively good sales. His 2001 album, "Many More Roads", was nominated for a Grammy for best reggae album.

He lost to his brother Damian's album, "Halfway Tree".

In 2002 he played lead role (Biggs) in the film Shottas along with Spragga Benz, Paul Campbell, Louie Rankin, Wyclef Jean, Screechie Bop and many more. It is an original story that shows the life of a shotta/gangster on the streets of Jamaica and Miami.

He achieved even more success as a musician with a cover of Eddy Grant's Electric Avenue, in collaboration with the Fugees' Pras. He has also starred in several films, including Shottas in 2002 and as John the Baptist in the 2004 film Haven.

Remaining true to his Jamaican culture, Ky-mani'?s fondness for all genres of music influences the work he creates. Ky-mani is an artist with no limits. Incorporating world music, hip hop, blues, rock and a grass roots sound into his music, the end product is the pure representation of life for Ky-mani. The Ky-mani Marley sound is one that transcends cultural lines and prohibits him from being categorized as only a reggae artist. His raw, unadulterated, gruff sound captures the listener and reverberates the essence of Ky-mani?'s life story.

Ky-mani launched his latest album "Radio" in 2007. The album features several key singles including One Time, The March and Conversation among others. All of the songs contain Marley's unique sound of classical reggae beats mixed with contemporary hip hop. Also featured on the CD are some of today's hottest artists including Young Buck, Mya and Gail Gotti.