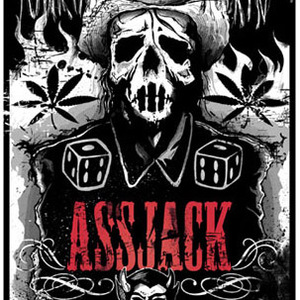 Assjack is one of the three features of Hank Williams III's live show, and they started off playing the Hellbilly material throughout 1999-2002, until they evolved in to a strictly hardcore/punk metal band. The band features Hank Williams III on Guitar and Vocals and Gary Lindsey on Vocals. Assjack has had various musicians on all instruments over the years. but, Gary has been consistent on vocals for several years now. Bassist Joe Buck was also a consistent member for many years. However he left the band in 2008 to concentrate on his one man solo show called Joe Buck Yourself.

Assjack released 3 bootlegs CD's & just recently released their first official self titled debut album. The official Assjack album features only Hank III. He does all the instruments & vocals. the album was also recorded & produced by him.