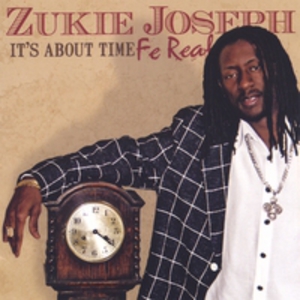 Junior Allen, aka Zukie Joseph, was born in Montego Bay, Jamaica. At an early age he was given the nickname Zukie by a community elder and mentor. Zukie was born on the 24th of February, which makes him Joseph of the twelve tribes of Israel. He is especially proud to be Joseph because two of his favorite and most influential singers, Dennis Brown and Bob Marley are also Josephs. Zukie Joseph grew up in a family of music lovers, four boys and two girls.

His parents constantly played every kind of music in the house; everything from Country and Western, Reggae, Funk, RnB, Soul, Jazz and Classical music. Zukie Joseph believes that his musical diversity stems from his upbringing.

His love for the dancehall started at an age where most kids couldn't cross the street. He said he was always the youngest youth in the dance, and nine times out of ten he would always get locked out of the house, followed by an ass whipping from his parents in the morning when he got home from a reggae dance. He loves dancehall music, but believes that as he matures musically he tends to prefer Roots Rock Reggae a lot more. His musical inspiration comes from icons such as Otis Redding, Curtis Mayfield, Stevie Wonder, Cat Stevens, Van Morrison, Bob Marley, Jimmy Cliff, Dennis Brown, Toots Hibbert, Al Green, I-Threes, Diana Ross and Roberta Flack. To name a few!

He came to Canada in 1989 and by 1990 he started singing on a local sound system called Mr. Basie Muzik. Between 1992 and 1994 he was the lead singer of a reggae band called The Messiah. In 1995 Zukie Joseph and three of his ex-band members went to a U-Roy concert and the four-piece band amazed them all. They went home and started P.H.D and once again Zukie Joseph was made lead vocalist. P.H.D was a huge success, they played over a hundred venues and was said to be Vancouver's No. 1 reggae band. P.H.D was together for three years.

Zukie Joseph has shared the same bill with mega Reggae stars such as Leroy Sibbles, Burning Spear, Justin Hines, the Wailers, Judy Mowatt, Maestro Fresh Wes, and Pablo Moses, Tanto Metro and Devonte, Kirk Davis and Half Pint.
Zukie Joseph presently sings lead and plays percussion with his new band Boom Daddy. They have been together now for over four years, they have two CDs to their credit and they are still playing tuff reggae music and great funk. Even though he is still an active member of Boom Daddy he enjoys his solo career and the musical freedom it brings him. Zukie Joseph writes a new song almost every day and claims he has got no control over this phenomenon. His quest is to fill the world with love through his music and his message is for everyone to be big and bold for tomorrow.

Zukie Joseph released his debut solo album January 2004 entitled It's About Time. This album could also be called versatility because of its diversity. It has a mixture of Dancehall, Roots Rock Reggae and Hip Hop undertones.
now here is the second album called; I'ts About Time Fe Real, which i know you will all love.
Zukie Joseph is truly gifted at his craft, an unstoppable rising star with unlimited potential. We will definitely be hearing a lot about this upcoming Lion!