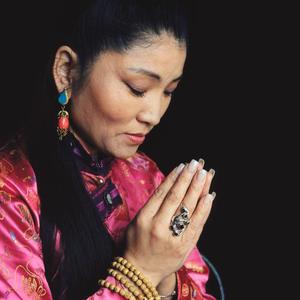 Yungchen Lhamo is a Tibetan singer. Her name means "Goddess of Song", a name given her by a holy man soon after she was born near Lhasa. She left Tibet in 1989 at age 23, via the perilous navigation of the Himalayas in order to escape the oppressive Chinese regime governing Tibet. She made a pilgrimage to Dharamsala, to receive the blessings of the Dalai Lama, where he lives in exile. She was inspired to reach out to the world through her music, to share her culture and educate people about Tibet. She moved to Australia in 1993, then to New York City in 2000.

Lhamo's Australian debut album Tibetan Prayer won the ARIA Australian Record Industry Award for best Folk/World/Traditional Music release in 1995. She is the first Tibetan singer to win a prestigious music industry award. The success of that record led to her signing with Peter Gabriel's Real World label. Her first record for the label, Tibet, Tibet, mainly features powerful acapella renditions of original compositions -- authentic Tibetan Buddhist prayers and songs. Her next recording, Coming Home was a collaboration with producer Hector Zazou, showcasing her beautiful voice, and also featuring chanting by Tibetan monks, a wide range of mostly modern Western instruments, and the benefits of multi-track recording, enabling Lhamo's voice to be layered repeatedly.