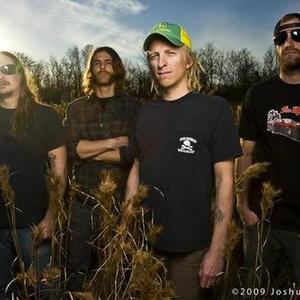 North Carolina. US ASG is a small band with a sound that's big in so many ways. The trio formed following the break-up of local Wrigthsville Beach punk band the Urethra Franklins when Andy Ellis (bass) and Scott Key (drums) teamed up with guitarist Jason Shi. Together they created a perfect fusion of punk and metal. ?If we had to classify it? we'd just say we play loud..? raves guitarist Jason Shi commenting on their punk, metal and classic rock n' roll sound. ?We're definitely not emo?. And all who have seen them live would surely agree to that.

Though, ASG is just getting their start.. They have no-doubt left their mark. Supported by the intense surf/skate community in their hometowns of Wrightsville Beach and Wilmington, N.C., ASG has gradually taken off in the southern North Carolina music community. ?We're really proud to be where we're from? states Jason, ?There's a huge music scene out here that people don't really know about and there's a lot of good bands out here that just don't get recognized.?

ASG managed to break the trend though and demanded the recognition they deserve. After self-releasing a self-titled full-length album in 2002 they were embraced by the surf community and soon after we're added to the bill of bands on Volcom's ?We've got Bush? eastern surf tour, playing along side Volcom Entertainment bands Places to Park and Pepper.

ASG have since been making waves across the U.S. They rocked the 2003 Warped Tour leaving in their wake legions of new fans with the punk/metal sound reverberating in their heads. Immediately following the Warped Tour they went on to shake up Volcom's ?Boy where tha heck're we going? east coast surf tour where they had an enormous impact on the east coast surf community. Then it was off to the Rockies for a winter tour with Guttermouth and Pepper. This summer one will find ASG rocking Warped Tour again with their unique classic metal/punk sound that serves as a refreshing departure from the pop punk and screamo bands that make up the majority of the Warped Tour stew.

ASG are determined to make a name for themselves and with this goal in sight, they are undoubtedly on their way. Their sound, influenced by such bands as Queens of the Stone Age, Janes Addiction, Foo fighters and In Flames, combined with their pure passion and intense live energy is like a blow to the head that leaves your eardrums ringing and keeps you coming back for more.

The Amplification Of Self Gratification