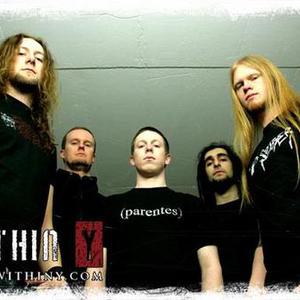 Within Y was formed by Nikke Almen (guitar), Mikael Nordin (guitar) and Andreas Solvestr?m (vocals) sometime during February/March 2002. In the end of March the same year Within Y hooks up with drummer Thim Blom. The band started to rehearse and wrote 4 deathmetal songs and in July 2002 Within Y started to record "Feeble and Weak". The demo was recorded in a music store called "Musikborsen" in Gothenburg. Within Y handled the whole recording process by themselves with a litte help by Matte Wanerstam who later on decided to join the band as the bass player.

Now Within Y started to distribute the demo "Feeble and Weak" and got great response.
At this point the band also got good response from record labels around the world. In March 2003 Within Y signs a record deal with the Dutch record label Hammerheart Records. The debut album, "Extended Mental Dimensions", was released March 22nd 2004.

In the fall of 2004 Nikke sadly announced his departure from the band. A massive search for a new guitarist starts, and in the beginning of 2005 Within Y announces his replacement, Niknam Moslehi. At this time the band has already started writing new material for their upcoming album.

During the recording sessions bass player Mattias Wanerstam decides to leave the band because of personal reasons, and will be replaced by long time friend of the band, Jonas Larsson.