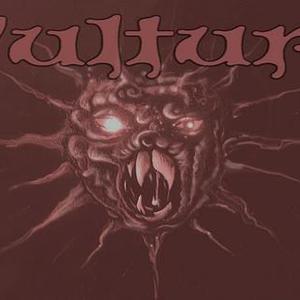 1) Vulture was a thrash metal band from Rotterdam, the Netherlands formed in 1983. They released 5 demos and 2 full-length albums, "Fatal Games" (1990) and "Easier To Lie" (1993). 2) Vulture was born in the middle of 1995 under the name of Damnation. In the following year it became Vulture already. With fast and well worked death metal, consequence of the variety of influences acquired by the components, the group of Itapetininga ? SP (Brazil) has always tried to put together different lyrics and really heavy songs.

2) Vulture was born in the middle of 1995 under the name of Damnation. In the following year it became Vulture already. With fast and well worked death metal, consequence of the variety of influences acquired by the components, the group of Itapetininga ? SP (Brazil) has always tried to put together different lyrics and really heavy songs.

Consisting of four different tracks summing up 25 minutes of insanity, the first demo was released by the studio Asas ? SP, the demo Dreams of Despair was all made of songs composed by the band
In the beginning of 1999 , the band launched the live demo with six tracks called Death Metal Live, which shows the good relationship of the whole group.

In the beginning of 2000, the band already got in the studio to record its first CD, A Call For The Ancients, consisting of 9 different and fast tracks, summing up 60 minutes of a Exciting Death Metal.

The band starts 2001 with a different members, Andr? Barros leaves the band and Andr? Machado Xavier replace him in the drums in a more aggressive and heavy way. With the leaving of Lucas Guidi of the band, Adauto takes the vocal over as well and Felipe Camargo Munhoz in the bass, this was the group of 2002 that records the demo Hellraised Abominations, which results in great opinions of the specialized media regarding the band and in a lot of shows inside and outside the state of S?o Paulo. In 2003, Vulture will participate of 3 Black World Compilation, MetalVox and Valhalla Demo Section, all of them with a great production and great bands in the national scene .

In July of 2003 Felipe leaves the band because of personal problems. In 2004, with a great deal of news songs, Vulture is back and ready to get in the studio again for the Test Of Fire, Debut CD 2004...

3) VULTURE was the brainchild of Crowbar mastermind Kirk Windstein and Tungsten front man Al Hodge. After many drunken ?Metal Nights? at Kirk Windstein's apartment on N. Hullen in Metairie, LA. (The object of ?Metal Night? was to bring several vinyl albums that featured songs with ?metal? in the title from bands like Piledriver, Metal Church, Icon and wear an extra old metal shirt from Manowar, Judas Priest and Iron Maiden). These parties were held regularly and various members from the NOLA Underground scene would join in on the drinking and BBQ like Kyle Thomas from Exhorder, Todd Strange and Kevin Noonan from Crowbar and Doobie from Graveyard Rodeo. ?We'd get together at Kirk's pad and get loaded and jammed to these songs or bootlegs of Kiss from the 70's that Kirk had. All of those songs were anthems that celebrated Metal in all of its glory. So Kirk and I tossed around the idea of writing our own tunes and calling the band VULTURE?, stated Al Hodge. They wrote 4 songs and enlisted Tungsten drummer/engineer Mark Talamo's services to play drums and record the songs. Although there were only three of them, they developed 4 alter egos to supply the band with a line up.

The band tuned their instruments up (at the time all of the NOLA bands tuned their guitars to C or even to A in some cases). The drum tracks were laid down and the guitars and bass were eventually recorded as well. The only song to get finalized was ?Shield Of The Warrior?. A tape of that song was circulated in 1996 through the underground, but due to different work/band schedules, the recordings were never finished. Unfortunately the master tapes were in the vaults of H/T studios in Chalmette, Louisiana and were lost forever after the massive floods destroyed the gulf coast from the wrath of Hurricane Katrina in August of 2005.

(An incidental note: the members of VULTURE were thanked on the debut Crowbar album, ?Obedience Thru Suffering? that was released in late 1991 through Grind Core Records)

5) Vulture is an experimental 3-piece from Richmond, VA. vulturerituals.bandcamp.com

6) Vulture is a Doom Metal / Sludge band from Pittsburgh, PA. Formed in 2007, a vocalist change in 2009 and continued focus on heaviness and groove, Vulture's thick murky sound has evolved into what they refer to as ?Steel City Sludge?. Members: Justin Bach, Justin Erb, Gene Fikhman, Kelly Gabany and Garrett Twardesky.

Pick Up the Pieces