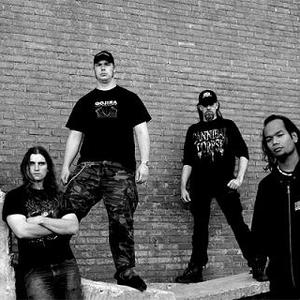 There are atleast two bands with this name, a swedish and a dutch death metal band. There is also a UK-based dubstep producer with the same name. 1) Dutch death metal outfit Vermin puts a lot of progressive elements into their music, which makes the band stand out in the underground scene as it is today. An analysis of Vermin's work reveals the likes of Cannibal Corpse, Hate Eternal, Morbid Angel, Cryptopsy, Immolation and Deranged as the band's main influences...

There is also a UK-based dubstep producer with the same name.

1) Dutch death metal outfit Vermin puts a lot of progressive elements into their music, which makes the band stand out in the underground scene as it is today.

An analysis of Vermin's work reveals the likes of Cannibal Corpse, Hate Eternal, Morbid Angel, Cryptopsy, Immolation and Deranged as the band's main influences... but also other well established names such as Meshuggah and Dillinger Escape Plan have put their mark on the overall creative process.

The demise of their former band led drummer Pascal and axeman Ron to the birth of Vermin back in April of 2002. An incredible amount of rehearsal time spent -up to 4 times per week- resulted in an abundancy of ideas and songs. Recordings of those ideas and songs led Vermin to establish a first complete five piece line-up, and a finished demo: "Alea Iacta Est". The 3 songs on "Alea" got Vermin a lot of gigs, but the band members didn't just sit back to enjoy that ride. Pretty soon preparations for a second demo started.

This time a full-length demo called "Solypsis" (2003) saw the light of day. On top of that, it carried a bonus video clip for the song "Deviate". Vermin had no fear of putting the pressure on. That, as well as the amount of bookings, went straight up.

In May of 2004 singer Thomas quit due to a lack of interest in death metal and the remaining Verminians had to go after a suitable replacement; it didn't take all that long before Laurens was found and recruited.

In October 2004, Vermin hit the Excess studios in Rotterdam, The Netherlands (a well known place to record at in death metal circles) in order to lay down 16 tracks, thus paving the way for yet another release, bearing the title "A Nihilistic Swarm". A long awaited one this time!!

Since both "Alea" and "Solypsis" had received good reviews musically but less than outstanding ones when their productional aspects were taken into consideration, extra time and effort was spent in that department. "A Nihilistic Swarm" also contains bonus videos: a brand new clip and footage of the recording sessions at Excess.

All the pieces of the puzzle began to fall into place as Vermin headed into the year 2006. The band signed a deal with Deity Down Records, the album was released on May 20 of the same year. A live gig in a CD store of all places marked ?A Nihilistic Swarm?'s launch. The band hit the stage at the Luckau, Germany based ?Fuck The Commerce? festival one week later, sharing the stage with the likes of Extreme Noise Terror, Hate Eternal, Gut and Embedded.

A 3 day tour through Portugal was a very special happening in October of 2006, and now, not even halfway through 2007 Vermin is about to join Brasilian metalheads Insurrection Down as their special guests on a leg of their European tour, which will take the bands to Germany, Czech Republic, Poland, Switzerland, Belgium, and The Netherlands.

2)A swedish band that started of as a death metal band and then slowly became a death'n'roll band.

A Fist Full of Hell