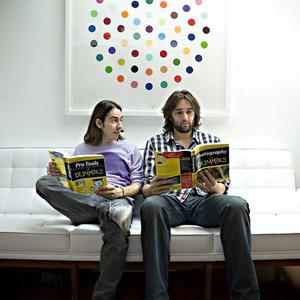 thenewno2 is a band formed by Dhani Harrison and Oliver Hecks. Dhani Harrison plays lead guitar, synthesizer, and vocals. Oli Hecks plays drums and synthesizer. The band's website and myspace page feature several songs and videos entitled Choose What You're Watching and Another John Doe, directed by Oliver Hecks. Their debut EP, EP001, featuring vocals by Amanda Butterworth, is available via iTunes music store and CDBaby.com. The tracks 'Another John Doe' and 'Choose What you're watching' became available for download at both these places on March'08.

Their debut album You Are Here was released on August 1, 2008, and was written, produced and performed by Dhani Harrison and Oliver Hecks.
There are contributions on the record by Bryony Atkinson (vocals), Nick Fyffe (bass), and Tom Hammond (cello). It was recorded and mixed by Paul Hicks and thenewno2.

Their label is called Hot Records Ltd. and their songs are published by Harrisongs Ltd., a company founded by Dhani's father George Harrison.

Their new EP, titled EP002, is on iTunes and came out September 27.

Choose What You're Watching