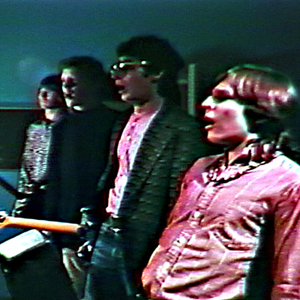 The Prefab Messiahs were an eccentric US proto-lo-fi/post-punk left-field garage pop band associated with the "Wormtown" (Worcester, Massachusetts) punk/arts scene of the early 1980s. Stylistically, they have been compared with Television Personalities, Swell Maps, Josef K, Ty Segall, The Clean, King Tuff, and The Twinkeyz. Together from 1981-1983, they played basement and club shows fairly often.

Together from 1981-1983, they played basement and club shows fairly often. Aside from the 1983 cassette Flex Your Mind, though, no recorded material was available from them until 1998's Devolver CD-R anthology. Several songs on the album were produced by their friend (outsider psychedelic singer-songwriter) Bobb Trimble.

At their first-ever gig, the band distributed a simultaneously prank-ish and poker-faced "manifesto", using 60s rock album liner notes as a wobbly template. It began:

"...Was it only 3 or 4 weeks ago that the future PREFAB MESSIAHS first pooled their cosmic energies and talents, and ? crooning their messages about our Plastic Age ? decided to totally revolutionize Pop Music? The Concept was shocking in its boldness ? 4 young men with a Destiny ? from the Store 24 to Mister Donut their eyes burned with what they saw, even as they lapped it up faster than a small order of McDonald's fries. Reality could not keep the PREFAB MESSIAHS down! Still, if the Media is the Message, just what are these guys talking about? In short, they're talking about you and me and no one in particular ? about the kind of Eternal Struggle that most "bands" and "musicians" don't even realize exists..."

The stark reality of the Reagan Era had already taken hold, with its yuppie-driven consumerist, conformist and "product"-focused fetish culture. In an attempt to deal with it all, our heroes sought refuge in the Dada reverie and post-WWII existentialism that ended up yielding their moniker. In the New Religion of mall culture, product placement and instant gratification, "prefab messiahs" like Ronald McDonald and the Pillsbury Dough Boy were trotted out by their corporate masters to replace the old guard of unprofitable prophets.

That was the working Concept, at least ? and the The Prefabs mischievously (naively?) married it to an unlikely collision of primitive post-punk, grainy psych, and left-field garage pop ? all at a time when terms like "indie" and "alternative" weren't even bandied about yet.

The Prefab Messiahs have reunited (or as they say, "re-franchised") several times for the Wormtown Anniversary Bash festivals, including the 20th in 1998 and the 25th in 2003.

An appearance of the "2008 franchise" of the Prefabs occured at the Wormtown 30th Anniversary Bash on May 3, 2008, in a combined set with Bobb Trimble. Guest members in this franchise included Gary War and Ned Egg (Gary was a member of Ariel Pink's band; also, Gary and Ned previously comprised the band Chas. Mtn.).

In December 2011, Fixed Identity released Peace Love & Alienation, a collection of eight archival Prefabs songs newly remastered by Jay Rajeck (of TRS-80), who has also worked with Ariel Pink's Haunted Graffiti. Two of the songs were produced by Bobb Trimble in 1982.