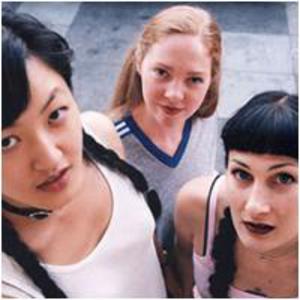 Once upon a time in New York City, a guitar-wielding Princess from the East began writing anthems for a new rock revolution. Enforced by an ultra-talented array of rockergrrls, The Hissyfits have been steadfastly rocking out with their mix of sweet harmonies floating over raucous guitars and drums. Raised on The Go-Go's through Nirvana, The Hissyfits have created their own dark, driving, bittersweet sound which will touch your heart and thrash your soul. Check 'em out for a hiss and a kiss.

After coming together through New York City's Village Voice several years ago to "just have some fun," The Hissyfits have endured and matured into one of their generation's more significant punk-powered, pop-rock prizes. Through line-up changes and music industry mayhem, Hissyfits lead singer and guitarist Holly Jacobs has kept The Hissyfits phenomenon steadily growing with heartfelt anthems of misfortune and fortitude. The Hissyfits' universal themes of utter anguish tempered with pure pop perfection captivate innumerable knowing misfits, scorned lovers, and survivors worldwide.

Amazingly, their first 7" vinyl record wound up in the hands of legendary rock critic Greil Marcus who instantly proclaimed their music "Pop-When It's Perfect!" in Interview Magazine, and their first full-length EP, Letters From Frank (Top Quality Rock and Roll), debuted in July 2001 on the CMJ core radio chart at #65, far above more well-known bands like the White Stripes, Black Rebel Motorcycle Club, Nikka Costa, and Alkaline Trio. Critics lauded their debut effort as "the most gripping and startlingly frank gone-wrong relationship album of the year" [San Francisco Bay Guardian] and "a worthy successor to the legacies of Sleater-Kinney, early Bikini Kill, and the Runaways" [Boston Phoenix].

Long-time fans are saying The Hissyfits' stellar new line-up is the finest-sounding and most vital yet. This latest evolution includes the addition of viola, sky-rocketing the long-time power-trio to an entirely new lush and textured level. This traditionally classical instrument sounds remarkably reborn and relevant, weaving in and out of the layers of crunchy guitars, driving bass and drum beats, and soaring harmonies. Their sound remains a study in contrasts--light and dark, melodic but moody, edgy yet serene--eloquently described by New York Waste as "sweet destructive pop that twists, turns and burns."

Despite their humble D.I.Y. beginnings, The Hissyfits have managed to impress a large and varied group of musical movers and shakers. Before they even had an album out, the girls were invited to play Joey Ramone's annual birthday bash accompanying the renowned Ronnie Spector on stage. They've gone from playing small rooms in the East Village to dates on the MTV Vans Warped Tour and international music events.

The Hissyfits were honored to be invited to play the largest Ladyfest festival to date (Ladyfest*Midwest, Chicago), with many other well-respected indie artists such as Le Tigre, Mary Timony and James Iha, Bratmobile, and The Indigo Girls' Amy Ray. They then went on to performing packed shows at the SXSW Music Festival in Austin, TX and have recently returned from a successful tour of the U.K. where they played with bands such as The Pattern and Chicks on Speed.

Upon previewing a demo track from their highly-anticipated new album, Kerrang Magazine boldly declared, "The Hissyfits rule...not because they're girls -- just because they do."