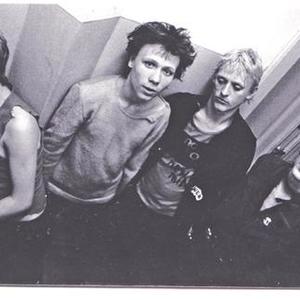 Sort Sol is a rock band from Copenhagen, Denmark - these days a trio with Steen J?rgensen, Lars Top-Galia and Tomas Ortved. The band was formed in 1977 as a punk rock outfit, originally under the name Sods. Despite changes in the group's line-up their current name, which translates into English as Black Sun; a commonly known expression for the phenomenon occurring, when starlets gather in huge flocks before migrating in the autumn in Denmark, has remained with them since the early 1980s.

For reasons unknown, the Danish press often refers to their musical style as 'punk', though nearly everything they have put out since 1980 is more reminiscent of styles such as post punk & goth.

The band was formed in Copenhagen, 1977. The original lineup consisted of: Steen J&oslash;rgensen (vocal), Peter Peter[ Schneidermann (guitar), Knud Odde (bass guitar), Tomas Ortved (drums). The band released their first record Minutes to go February 1979 and it is considered the first Danish punk album. They went on to release Under En Sort Sol in 1980, a more experimental album, influenced in part by Joy Division, Pere Ubu and Television.

T. S. H&oslash;eg (sax) (Cockpit Music) entered the group for a short while in late 1980. In 1981 the group released their first single under the name Sort Sol. The single "Marble Station" (b/w Misguided) is only released in England on the record label 4AD. In March 1981 the group played their first concert outside of Denmark. 1983 saw the release of the album Dagger & Guitar, featuring punk idol Lydia Lunch. In 1985 Lars Top-Galia(guitar) joined the group, and the line-up remained like this until 1996, when Peter Peter left due to arguments within the band, partly owing to artistic differences. In 1988 they made the album Everyhing that rises must converge which has been described as the their artistic breakthrough. The album consists of 10 slowpaced tracks that rely heavily on the talented deep voice of Steen J?rgensen. In 1991 they made their first CD which was Flow my firetear. This was the first of their records reaching a broad audience. They reached their peak popularity three years later with Glamourpuss which sold 100.000 records in Denmark.

Internationally famous artists who have performed and/or recorded with the group include William S. Burroughs, Lydia Lunch, Link Wray and The Jordanaires - as well as nationally renowned musicians like bass player Wili J?nsson of Gasolin&acute; fame , guitarist Moe Lind (Boghandle, Deepfried Toguma), guitarist and producer Johnny Stage and keyboard player Troels Bech (The Poets, originally Poets Of The Signature - in the US and Canada known as The Sealand Poets) have collaborated with the group, both in the studio and live.

Everything That Rises Must Converge!