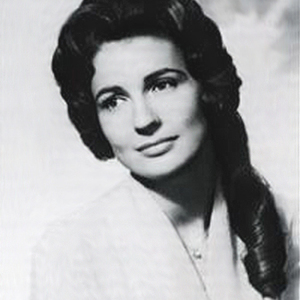 Ina Anita Carter (March 31, 1933 in Maces Springs, Virginia ? July 29, 1999 in Goodlettsville, Tennessee) was the youngest daughter of Ezra Carter and Maybelle Carter (Mother Maybelle) and said to have the best voice of all the Carter Sisters. She was a versatile singer who experimented with several different types of music and played stand-up bass alongside her sisters Helen Carter and June Carter Cash in the famed country music act the Carter Sisters. The trio joined the Grand Ole Opry radio show in 1950, opened shows for Elvis Presley, and joined the Johnny Cash Show in 1961.

In 1951, Anita scored two Top Ten hits with "Down the Trail of Achin' Hearts" with Hank Snow at No. 2 and "Blue Bird Island" at No. 4. She reached the Top Ten again in 1968 with "I Got You" with Waylon Jennings at No. 4 and recorded several folk albums in the late 1960s. In 1962, Anita recorded a song co-written by her sister June called "Ring of Fire". After hearing the record, her future brother-in-law Johnny Cash reportedly dreamed of hearing Mexican horns on the record and told Anita that if her song did not hit in five or six months he would record it "the way I feel about it." After the song failed to make the charts, Cash recorded it in March 1963 with the horns and the Carter Sisters (along with mother Maybelle Carter). The revised song went on to gain wide international popularity and became one of the biggest hits of his career.

Anita Carter died at the age of 66 after several years of poor health, a year after eldest sister Helen and four years before middle sister June.