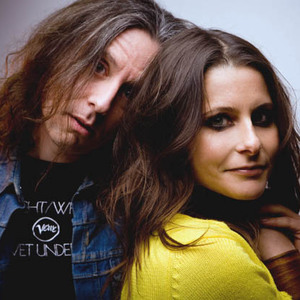 Snow and Voices is an atmospheric collective of LA musicians formed by the duo of Lauri Kranz and Jebin Bruni. Snow and Voices is set to release their third album Anything That Moves on Elastic Ruby Records on May 25, 2010. Their latest effort is a languid dreamscape of nine songs featuring the hauntingly beautiful vocals of Lauri Kranz, whom Harp magazine described as ?gorgeous, a sleepy, honey-dipped cross between Hope Sandoval and Joni Mitchell,? accompanied by her songwriting partner Bruni and his multi-instrumental talents.

Their latest effort is a languid dreamscape of nine songs featuring the hauntingly beautiful vocals of Lauri Kranz, whom Harp magazine described as ?gorgeous, a sleepy, honey-dipped cross between Hope Sandoval and Joni Mitchell,? accompanied by her songwriting partner Bruni and his multi-instrumental talents. The two weave together a sensuous musical experience dripping with emotionally charged undercurrents. Pop Matters has characterized it as a ?warm, ethereal, ambient sound at every turn, their keyboard-driven tracks consistently lush and lilting.?

About the Artists:
Lauri Kranz grew up just outside of Hartford, Connecticut writing songs whose content worried her parents enough to send her to a child specialist. Moving to NYC as a young adult, Kranz would continue to write songs in the evenings while working as an agent trainee in the mailroom of the William Morris Agency. Lauri took full advantage of the perks of her job, immersing herself in the art and music scene of the city that would inspire and nurture her songwriting. Kranz then took a job with Julia Robert's production company before moving to Los Angeles in search of something new. Lauri would finally record her songs for the first time, releasing two solo albums All This Time We Could Have Been Friends and How To Disappear.

Soon after moving to Los Angeles, a friend of Lauri's suggested she meet Jebin Bruni. Suffice it to say the two cannot recall the exact nature of their meeting, only the simple fact that it was certainly fate that they did. Instantly connected by their love of music and aesthetic tastes and temperament, they have been working together unquestionably ever since.

It was during the recording of the first Snow and Voices album in 2005 that the collective band of co-conspirators was born. Lauri explains ?Jebin and I would call up our friends to come by and make their own musical contribution. Darrell Thorp came in at this point and engineered and co-produced the album and we have worked together ever
since. Each CD since has worked in the same way. We go in to record, we call some friends and everyone gathers round.? The live shows have evolved this way also. The band can be any number of incarnations of our friends depending on who is available on any given night. When asked in the interview how she would categorize their ?scene? she simply replied, ?Scenes are uncomfortable for me. I like what can happen when no one is paying attention.?

Jebin Bruni is a rare breed in that he is a Los Angeles native as well as a multi-instrumentalist. Bruni grew up the opposite of Kranz, in the midst of an extremely musical family. Both of Jebin's grandparents worked as music teachers and his parents met while performing in musical theatre in New York. ?My grandmother sat me down in front of the piano before I can even remember. She had pretty much every instrument in existence lying around her house and I learned to play them all by the time I was out of grade school.? Forming his first band at the tender age of fifteen Jebin was playing in clubs immediately and just prior to being signed by MCA Records he started playing with Public Image Ltd. Since then Jebin has gone on to play with a long and impressive list of musical artists that includes Aimee Mann, Fiona Apple, Liz Phair, Michael Penn, Marianne Faithfull, Linda Perry, John Doe, Joe Henry, Grant-Lee Phillips and Louden Wainwright.

Snow and Voices new CD Anything That Moves follows up 2008's What The Body Was Made For and 2005's self titled debut album. For further information and upcoming tour dates please go to www.snowandvoices.com and www.myspace.com/snowandvoices.

All press inquiries can be directed to:
Annissa Mason PR
annissa@brookescompany.com