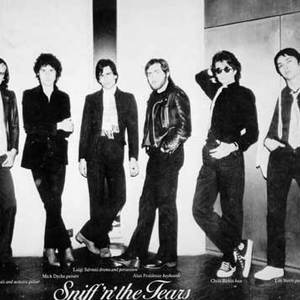 Sniff 'n' the Tears is a band perhaps best known for their 1978 song Driver's Seat. But despite this being a hit in many countries (including number eleven on the American Billboard chart), it only briefly entered the top forty in the UK. The bands appearance on Top of the Pops was followed by a problem with EMIs pressing plant which meant that no one in the UK could buy the single. Fickle Heart, the album containing Driver's Seat, was followed by three more for the Chiswick label: The Game's Up in 1980, Love/Action in 1981 and Ride Blue Divide in 1982.

Singer and songwriter Paul Roberts went on to make two solo albums for Sonet Records, City Without Walls in 1985 and Kettle Drum Blues in 1987.

When an advertising campaign saw Driver's Seat top the Dutch charts in 1992 Roberts took Sniff 'n' the Tears out on the road in the Netherlands and Germany, followed by a new album No Damage Done. Since then Roberts put out one more record, 2001s Underground, and is currently working on new material.

Driver's Seat was featured on the soundtrack to the 1997 movie Boogie Nights.

The band has had plenty of musicians, but the original member is lead singer and songwriter Paul Roberts.

A Best Of Sniff 'n' The Tears