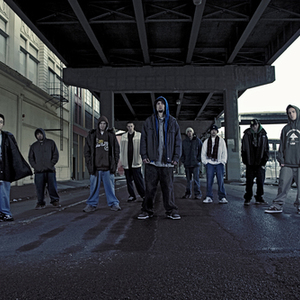 Sandpeople was formed roughly three-and-a-half years ago as an unlikely gathering of hip-hop artists in the Pacific Northwest. This crew has since built itself into a 12 member unit fully equipped to fill a stage and empty a keg (preferably in reverse order). Within the first two months, and long before most Sandpeeps had even met each other, their debut album Points of View was recorded and released over a two week span.

That album laid the ground work for what has become a quick moving crew with high standards. Having several sub-groups interwoven throughout the bigger collective, the crews catalogue has been growing rapidly since their inception and only continues to gain momentum.

It wasn't until recording for their second album All in Vain began, that many of the Sandpeople finally had met everyone in their crew.

Out at Simples place was where I actually met Al-One. We were in the studio and I was engineering while he recorded his verse to Fall Apart. It took that long. -Ethic

While the truth is that, until recently, this was a crew of relative strangers, the music they made would never lead you to believe it. A signature sound was forged from the outset, and All in Vain is the proof. Keep an attentive ear turned to the audio section, as new music is sure to appear frequently.

To the untrained eye, Sandpeople may appear to be a confusing mass of hungry emcees full of passion and low on serotonin. To the trained eye, this is a certainty. In the cloudy and gray corner of this country not known for its bountiful supply of physical sand, an inappropriately named force is emerging. Concerned first with making quality music that is relevant to real everyday life, Sandpeople are sure to make connections with listeners where other artists most commonly fail to. As their name and inventory continues to expand, this will undoubtedly be looked back upon as the crews humble beginnings. Sandpeople, A brilliant fusion of talent and dependencies.