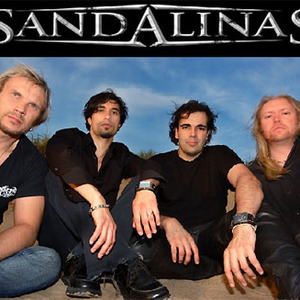 Sandalinas is a Spanish progressive metal band founded in 2001 by guitarist Jordi Sandalinas, featuring Apollo Papathanasio on vocals. Their first album, Living on the Edge, was produced by Andy LaRocque and released in 2005. The band is on hiatus because Jordi Sandalinas is working on his first solo album.Sandalinas' first EP, Like an Arrow, was released in 2001 and a single, "Die Hard", followed in 2002.

The following year, Sandalinas contacted Andy LaRocque, guitarist of King Diamond, because he was interested in recording an album at his studio located near Gothenburg. The album, called Living on the Edge, was recorded in 2004 and released in 2005 by German label Massacre Records in Europe, Canada and Australia, and later by Nightmare Records for the United States and Art Music for Russia. A European tour supporting Cornerstone and dates supporting Sebastian Bach, former Skid Row singer, and Steven Adler, former Guns N' Roses drummer, were cancelled due to personal reasons. A few months later Sandalinas supported Y&T, Yngwie Malmsteen and Scorpions on a major and successful Spanish tour.

Power To The People (EP)

No Matter What (EP)

Fly To The Sun

Living On The Edge