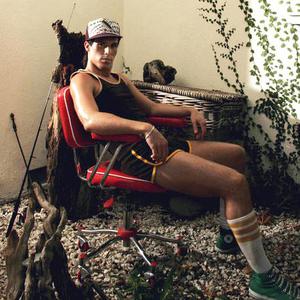 Australian Sam Sparro's music is the sum of his church choir upbringing, his international cultivation and his penchant for back-alley warehouse parties and clubs. Sparro's debut single, Cottonmouth, was released in late 2007. Sam's first album, Sam Sparro, was released in April 2008, as was the single Black & Gold, which was critically acclaimed and performed well in the charts of many countries, reaching number 2 in the UK.

Sparro's debut single, Cottonmouth, was released in late 2007. Sam's first album, Sam Sparro, was released in April 2008, as was the single Black & Gold, which was critically acclaimed and performed well in the charts of many countries, reaching number 2 in the UK.

As a child, Sam was a low-mileage triple-threat Christian school boy who acted in commercials and plays, sang in church, and danced just about anywhere there was open space. After moving from Sydney, Australia to Los Angeles at the age of 10, he continued to sing in church ? learning from some of greatest session singers LA had to offer. Singers that had performed with Whitney Houston, Michael Jackson, Chaka Kahn and the likes were booking Sam to sing on Demos, TV Shows and records.

At 17 Sam left home and moved overseas again. He went back to Sydney and worked in a music PR company before relocating to London. He quickly developed a love for the city and its accompanying culture and soundtrack. He spent his days temping in Record Companies and such, his spare time making electronic music in his bedroom and his nights dancing at clubs and house parties. After a few years abroad, Sam's visa was coming to an end so he returned to LA and continued producing and recording in his bedroom.

With his unique universal appeal Sam Sparro has already single-handedly wooed the rather spoiled Los Angeles music scene with his grace and signature wit. Currently featuring a semblance of laptops, keytar, and vocals, his presence is reminiscent of the funk greats of the 80s. His seductive, soulful vocals on top of post-modern electro beats however, make him distinctly 21st century.

Sparro announced his second album, Return To Paradise, on his newly redesigned website. It was described as being inspired by soul and funk from the late seventies and early eighties. A new video premi?red, featuring a new track from the album. In January 2012, The Shallow End was uploaded onto VEVO and YouTube. It is "compiled of home video footage of the making of the record and was filmed in LA, New York, London and Spain." The album was released spring 2012, accompanied by tours in the United States and Australia. A video was filmed for the upcoming track, Happiness.

I Wish I Never Met You (MCD)