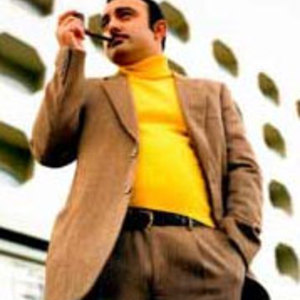 Sam Paglia was born on 4th July 1971, while at the local cinema "Shaft" was been shown. He was born under "Shaft" sign. He began to play piano by ear at the age of 8. Surrounded by hundreds of records (the father was a collector of country, blues, jazz and rock 'n roll ), Sam just played on the keyboard any music he would listen to. Even Giuseppe Verdi's opera influenced him a lot."I loved the early genius of piano such as James P.

Johnson and Jelly Roll Morton, they just drove me crazy!", he recalls. His family owned a little shop in the seaside resort of Cesenatico. During the summer he would just spend those lazy afternoons drawing cartoons and listening to his favourite records on a mini turntable. A record shop just around the corner would supply him with any kind of records."One of the record that really moved me inside was a soundtrack by Guido & Maurizio De Angelis from the motion picture " They still call him Trinity". I could'nt take it off the turntable!" Said Sam. "But the record that really made me shout: "I wanna be an organ player!", was the Stax 7" "Hip Hug Her" By Booker T. & MG's !"

In 1985 Sam moved to Urbino where he studied arts and graduated in 1990. In 1991 he bought his first organ and started to emulate his idol, Billy Preston. The organ was a Gem G7, a really baaaad Hammond clone! In 1991 he moved to London where he lived until 1995. During these years he worked as animator in different studios.He started to collect jazz organ lp's and rare soundtracks. In 1994 he was hired by the Steven Spielberg company Amblimation to work as an assistant animator on the feature film "Balto". Living in London gave him a great opportunity to improve his musical skills and the chance to buy his first piano Fender Rhodes and a Hammond C3.The early nineties were wonderful years for the music scene in the UK. Seeing live performances of many jazz and soul legends, made Sam change his idea about his career as an animator.He wanted to be as cool as those legendary organists, dressed in silk suits seated behind the amazing B3. The Amblin company located in London was about to shut down and relocate in America where it became Dreamworks. In 1995 Sam took the decision to leave London to start a career as a musician. Back to Italy with his new organ, he was ready to start a new life. After more than a year spent in his garage playing his beloved Hammond, listening and learning from heroes of organ like Jimmy Smith, Jimmy McGriff, Jack McDuff, Trudy Pitts and Don Patterson, Sam felt he could go out on the road.

The first group he put together was in 1996. It was called "Soul circle" and naturally Sam played the organ, Sharon Brewster was on vocals, Chicco Capiozzo (son of the legendary drummer Giulio Capiozzo co-founder of Area group) on drums, Bob Doozy on guitar, Giulio "Doktor Zoil" Aloisi and Gabriele Medri on electric bass.The group played covers of the Meters, Donny Hathaway, Curtis Mayfield, Quincy Jones, Jimmy Smith and Lalo Schifrin's songs amongst some originals written by Sam. In 1997 Sam decided to record some of these songs in a local recording studio. The album he had in mind had to be something like an original soundtrack halfway between a blaxploitation movie and a spaghetti mafia low budget film. After nearly a year the album "B-Movie heroes" was created.

For this album Sam played Hammond, Wurlitzer, Rhodes, Clavinet and vocals, Chicco Capiozzo, Christian Canducci, his brother Simo Paglia on drums, Chicco Montefiori on sax, Alessandra Muccini on vocals and Doktor Zoil on bass.The album cover was entirely designed by Sam.The album was soon released by Irma Records, an independent label based in Bologna, a leading producer in the acid jazz and easy listening market. The album came out in 1999, where it instantly became one of the best albums to come out of the so-called Lounge Italian movement. The tune "After pizza" soon became a classic at hip parties and on dj's playlist. Immediately after the album was requested as library music. A lot of attention was being paid to this newcomer and eventually all the airplay that the album received, lead some tracks being chosen as background music on various channels of the Italian television network. A change of musicians was made and a new trio was born, "Sam Paglia Trio" Chicco Canducci joined as a drummer and Enrico Farnedi came in on trumpet and electric bass.Sam bought a Ford Transit van to carry the heavy C3 and Leslie speaker and they started to travel all over Italy and abroad. Together in 2000 they produced the second album " Nightclubtropez", an album deeply inspired by some of the greatest Italian film composers of our time eg. Piero Umiliani, Gianni Ferrio, Armando Trovajoli and above all Piero Piccioni.

The title track "Nightclubtropez" is dedicated to an Italian cinema idol, Alberto Sordi (many films in which he starred featured music by the great Piero Piccioni). The same year, Sam's trio performed along with Maestro Piero Umiliani, a memorable concert in a small club in Cesenatico. Piero played on Sam's Fender Rhodes an amazing version of "Mah-nah, mah-nah", the tune he composed in the 60's, which became the theme song for the famous American television program, "The Muppet Show". "Nightclubtropez" became a massive success for Irma.The record became a best seller worldwide reaching Japan, Australia, the U.S.A., Brazil. Some of the tracks of the album became part of the tv series "Sex& the City", while in Italy the tune "Naitrope' Clebtrope' " became the music for a soap powder commercial. Along with Sam's trio, other musicians joined the recording sessions: guitar player Marco Vienna, the brothers Andrea and Gionata Costa on strings, Cecilia Angelini on vocals and Valentino Bianchi on sax. Again the cover art was designed by Sam. Sam and his pistachio coloured Hammond, soon became known as "The Godfather of lounge".

In 2000 the sax player Alex Scala joins the group and the sound takes a soul-jazz direction .In 2002 Sam leaves Irma records and produced another album for an independent label called Cinedelic. The new album "Killer ChaChaCha" came out in 2003. It's a soul-funk album in which Sam does covers of Lalo Schifrin's "The Liquidator","Bullitt","Room 26" and "Sanford &Son" by Quincy Jones. The only tune sung on the album "Stripper girl", performed by the jazz singer Sandra Cartolari, was remixed by dance floor guru Frank Popp and released as a 7" vinyl for Cinedelic. Both of the art covers were once again designed by Sam.

In 2004 Sam met the director Max Croci from Milan who asked him to produce original music for his documentary, commissioned by Sky television, about Italian cop movies of the 70's ("Italia 70, il cinema a mano armata."). The theme "Camorra Moog", written for the title sequence shot by Croci in a perfect 70's style, does reflect Sam's ability to emulate the great composers of this genre: De Angelis brothers, Stelvio Cipriani and Franco Micalizzi. Some of these tracks produced with his brother Simo, along with other unreleased tracks were worked into a limited edition album entitled "The rare Sam Paglia". Recently Simo Paglia became the new drummer in his brother's group while Sandra Cartolari continues to sing in the quartet. The brothers have also produced more music for Max Croci: the theme for his short entitled "Cheese cake" and the music for the Sky documentary about Italian b-movies ("l'italia dei generi"). The same year the Paglias composed original music for tv advert "Dash". In Dec. 2005 "The Sam Paglia quartet" was invited to play live at the Purple Weekend festival in Le?n (Spain).