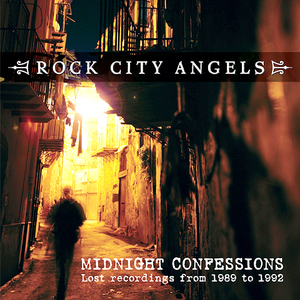 The Rock City Angels were born in late 1981 at a screening of ?The Decline of Western Civilization? when bass player Andy Panik met future vocalist Bobby Durango and they started a band together in South Florida. The band, called the Abusers, were a punk band in a scene of cover acts and rose quickly through the ranks. After opening for such acts as Black Flag, UK Subs, TSOL and the Circle Jerks, they rebelled again and expanded their musical horizons.

No longer content with the limitations imposed by punk rock, they began to experiment with different styles of music, while keeping their punk edge.

It was during this time that they changed their name to Rock City Angels and worked different musical genres into their style. From glam, soul and blues to classic rock, the band then moved to Los Angeles where they quickly gained a following with their inclusion of guitar players Johnny Depp and Mike Angel. In 1987 they were signed to Geffen Records, soon after Johnny had left to pursue a career in acting and Angel quit for personal reasons.

With the basic line-up in tow, they moved to Memphis where Bobby, Andy, Doug Banks and drummer Ringo Jukes hooked up with guitarist Mike Barnes to record the "Young Man's Blues" LP with Jim Dickinson who had just produced the Replacements.

"Young Man's Blues" went on to become a critical favorite of 1988 and sold hundreds of thousands worldwide. The band toured first with Jimmy Page, then Joan Jett and the Georgia Satellites. In 1991 the band toured Japan to sold out venues and continued to write for their next Geffen release.

That release would never come. Geffen failed to honor their contract and the band broke up in 1993. Throughout the 90's Bobby and Andy continued to play in other bands while on the internet a revolution was coming.

In 2001 Bobby discovered that Young Man's Blues was still a cult favorite and decided to try to record something different, something more personal. He recruited his old friends Andy, Jimmy James (an original RCA guitarist) and new drummer Chris Yates to create "Use Once and Destroy."

"Use Once and Destroy" was released Thanksgiving 2008.

And, released 2010 by FnA Records, "Midnight Confessions - Lost sounds - 1989-1993") ! These demo's for the unreleased second Geffen album have been remastered and sound fantastic! Includes a legendary performance from Brian Robertson of Thin Lizzie, who wrote 6 songs with Bobby in late 1992. Check it out at http://www.fnarecords.net/artists/32-r/152-rock-city-angels-midnight-confessions
The band is on a small tour in the U.S. to promote their new releases.