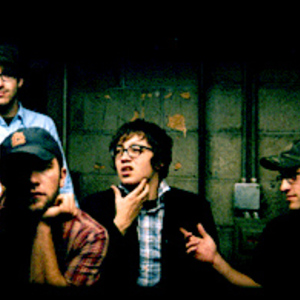 Rescue began as a side project in the late months of the year 2000, but after noticeable praise the band quickly took top priority over each members respective previous endeavors. The original line-up included Sean Clancy (bass), Michael Majewski (guitar), Alan Scheurman (vocals, guitar), and Brian Southall (drums). Right away Rescue ventured out on the road for some serious touring without any recorded material.

Then, in November 2001, they simultaneously recorded an EP, Even People and Not the Odds, and full-length, Volume Plus Volume (both currently available as a double disc with bonus material on Forge Again Records), at Smart Studios in Madison, Wisconsin, with producer Mark Haines (Archers of Loaf, Braid, Rainer Maria). While touring in Florida, Southall was bitten by a hairy spider, landing him with a bad limb. Ryan Clancy, brother to Sean, picked up right where Southall left off and has stayed with the band since. In the spring of 2004 Rescue went back to Smart Studios to join forces, once again, with Haines for the creation of a "mini" full-length, Flamingo Minutes, which was later released on Slowdance Records in the summer of the same year. Flamingo Minutes showed a growth for the band, inching away from the post-punk, start-stop sound heard in the previous releases and venturing into a darker, thicker, and much more sexually charged arena. While touring for Flamingo Minutes, the band was held back by a terrible roll-over accident that left Scheurman with a shattered clavicle and several broken teeth. After a relatively speedy recovery, Rescue was back in action and ready to focus on new material. As an effort to expand their musical versatility, Rescue added Cassandra Verras (piano, violin) shortly upon Scheurman's recuperation.

After two excruciating years of yellow lights, Rescue returns with Paranoid. A collection of new and old, Paranoid came together somewhat haphazardly, in pursuit of fresh approaches, while at the same time, enhancing their signature wall of sound. Recorded over several brief intervals between October 2005 and March 2006, Paranoid bellows reflections of ten hour work days followed by sessions that last until dawn. Chris Lazlo Koltay's (SSM, My Morning Jacket, Demolition Doll Rods) production provides proof that Rescue has no conventional format for which to define their sound. Paranoid hazily drifts from unsuspecting organ instrumentals, to indie rock anthems that proudly nod to their 90s counterparts, into lo-fi sing-alongs and future college radio classics, followed by ear-piercing weird heaviness. From the driving "Run as You Are," Rescue makes no hesitation to flaunt the splendor of Scheurman's and Verras's male/female vocal harmonies. "Breaking My Own Heart" provides a catchy soundtrack to the politics of libertine dating. Verras's orchestral skills are highlighted on the socially optimistic "We Bond". Majewski's guitar shrieks like a cat in heat, while Ryan Clancy makes 4/4 sound like 7/9 on "Please Erase Your Self From Me". Scheurman critiques his own masculine conditioning as he softly sings: "I keep on treating women like a fisherman fishing for the biggest fish, but, they're never perfect, so, I just throw them back in" on the working class psych-ballad, "The Leech". Finally, Sean Clancy's gritty fingers tell their own story through deep bass chords and baritone guitars on the album closer, "Sleepwalker, Shit-Talker". Paranoid also includes guest appearances from friends. One of many being Happy Chichester (The Afghan Whigs) being gnarly on an organ in a rendition of "Through/Suit" adding new life to an old live favorite that first saw light on Flamingo Minutes.

Rescue has not completely abandoned their old material, only, recognized the desire and necessity to challenge their audience with the maturity and refinement they have realized. The revitalizing sound that exists for Rescue in the form of Paranoid has emerged from the honing process with physical and emotional scars, as well as personal and financial debt. Fortunately, Rescue is prepared to share with the world the wisdom and character they have learned through the experience and struggle of their own rock and roll story, now nearly 7 years old, but only a few chapters in.

Rescue played their final show at the Magic Stick in Detroit with Russian Circles and La Salle.


However, There are at least two bands who perform as Rescue.

Another spells their name in all capital letters and is an acapella gospel group based out of Portland, OR. RESCUE is drawing in listeners of all ages. Their sound is described as fresh and exciting, as they have developed their own captivating style that brings listeners into an entertaining and worshipful arena. Influences include the well-known Take 6, Rockapella, and Acappella. With the doors that the Lord is continuing to open, RESCUE is looking to take their music to every corner of the globe.

RESCUE had its beginning in the spring of 1996. Jason Overstreet had just finished his senior college recital, in which he had written and performed several a cappella songs. Impressed with his performance, his professors urged him to pursue his musical talents in the field of a cappella music. Having had previous conversations regarding a shared passion for singing, Jason got in touch with high-school and college friends Jason McKenney, and former members: Chad Krober and Matt Lusk. Together they formed a quartet and committed to learning, writing and performing a cappella songs.

After independently raising funds, RESCUE entered the studio in November of 1998 and recorded their first CD. After the release in February of 1999, the response to the CD lead to an overwhelming amount of ministry opportunities for the group. RESCUE CD's and DVD's are immediately available for purchase in our RESCUE Store on this website. The majority of RESCUE's songs are written and arranged by current and former members.

Since founding RESCUE in 1997, Director Jason Overstreet continues to invest his time writing and arranging RESCUE's music and overseeing all aspects of RESCUE in order to maintain the stability and consistency of music ministry.

God has bestowed incredible musical ability upon Jason and other vocalists Brian Sell, Steve Cross and Brandon Bell, all of whom have an intense and focused passion for HIM. They are exuberant in their love of RESCUE music and feel both humbled and honored that God has chosen them for this ministry.