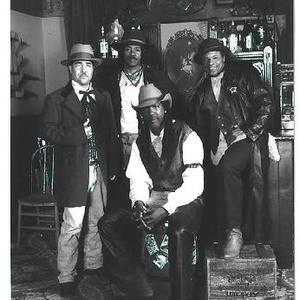 The Reggae Cowboys' name came from Stone's fascination with the role of African-Americans in settling the West in the 1800's. "One in seven cowboys were Afro-American. Nat Love was a rodeo champion and Alberta's John Ware was one of the best-known ranchers in Canada. Bill Pickett actually invented the sport of bull-dogging" says Stone. Reggae Cowboys pay tribute to the black cowboys of the past century and the contribution they made to cowboy culture. Take a look at the pictures to learn a little more about the black cowboys who are honored in the song "Tell the Truth"

Reggae & Country ?
The West Indies meets the Wild West! Country influences are widely pumped through the radio stations and films in the Caribbean islands, so a lot of West Indians grew up listening to country music. Stone grew up watching Westerns starring Clint Eastwood, Gary Cooper, Gabby Hayes, Audie Murphy and Fernando Sancho.
Bronco-bustin' Jesse Stahhl
In the early 1900's, Stahhl competed in an Oregon rodeo and made an extraordinary ride. However, the judges awarded him second place for a ride that deserved a first place finish. It was clear that skin colour had been factored into the final tally. To protest the judges' decision, Jesse rode his next bronc facing backwards with a suitcase in his hand.