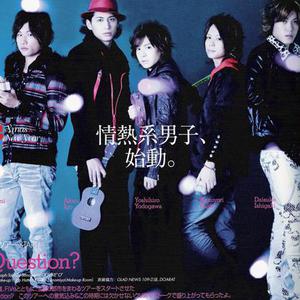 Question?, modeled after TOKIO, started out on May 2004, with four members, lead by MAD member, Noda Yuya as the lead guitarist, Yonemura Daijiro (?????) as lead vocalist and guitar, Fujiie Kazuyori as bassist and Yodogawa Yoshihiro as drummer.
In Summer 2005, the unit welcomed FiVe's keyboardist, Ishigaki Daisuke, as their own, and the unit became a full unit just like their sempais before them.
October 2005, after one last performance of Precious Memories, Noda Yuya left the unit to rejoin his previous unit M.A.D and Igo Akun joined Question? and took his place as lead guitarist, but didn't appear with the unit on Shounen Club until April 2006. Yonemura Daijiro left Johnny's in 2009.

There have been many artists who've claimed to be that next big thing, that next star, that next movement? in short, that next shit. They've matched their big mouths with big moves and big egos, but failed to bombard the airwaves with big hits. But San Antonio-native Daniel ?Question?Boskind is coming so far from left field that he might as well be playing for the Texas Rangers. With his quasi-regional music already garnering him serious airplay throughout the Texas Triangle, he's already shown and proven more than most.

The soon to be 27-year-old rapper was influenced by hip-hop culture at an early age. When he was six years old, He became fascinated with breakdancing and b-boying. Later, he grew an even deeper obsession for the art of rhyming, studying legends like Nas, Scarface, LL Cool J ,N.W.A and UGK. He immersed himself in hip-hop culture, and would ultimately use it as a means of escape.

?I grew up in all kinds of different environments on all different sides of town with people from all different walks of life?Trailer parks, Barrios, Ghettos, Low income housing. From my daddys house to my momma's house to even stints living with both sets of grandparents.. I draw inspiration from my life, and use both good and bad times to create my Music.? And the proof truly is in the sound that he has created.

His father was a heroin addict, and his drug usage would inadvertently inspire Daniel to lock himself in his room and listen to music for hours on end. ?Music was an escape from the thoughts of my father being in and out of jail, continuously violating parole, and being home for less than a year at a time.? This led to the cultivation of an unconventional relationship between the two. But if it were not for this unique bond, Question would not draw upon these experiences for the title of his forthcoming debut album, "Odd Jobs, Pawn Shops, and Dope Fiends.? He coined the phrase while describing his view of a Drug Addict's method of survival. The same means of survival that he would see himself utilizing, if he infact was not successful doing music.

In high school, Question was one of the founding members of local hip-hop group The Sleepwalkaz. It was within this group setting that he encountered early success, winning weekly freestyle competitions at neighborhood clubs. It wasn't long before an entertainment lawyer saw the group perform, and brought them to LA for a meeting with Loud Records. While there, Josh Rifkind, brother of Loud's head honcho Steve Rifkind, met with the ethnically diverse group, but he wasn't sold on the idea of a white rapper succeeding in the marketplace. Distraught and defeated, he left the group a year later, and soon after stopped rapping altogether. "I didn't want to rap at that point, ? he says. ?It was almost like I was bitter.? So from there, just barely out of high school, after the the birth of his first son, Question joined the military.

"The Military was probably the best thing that has ever happened me,? he says, noting that it was an experience that ultimately got cut short when he was discharged. ?It was a heart breaking experience for me because it was something I really wanted to do.? But while enlisted, he escaped with some valuable life lessons such as the importance of loyalty, integrity, being humble, and hard work, methods that he now incorporates into his blossoming music career.

With his GI bill money, and a burning desire to still be involved with music to a certain degree, Question headed back to LA, this time to learn how to be an audio engineer. After receiving his degree a year later, he packed his belongings and headed back to San Antonio. In Texas, with no money and no place to stay, Question began selling drugs to keep himself afloat. Luckily, he used his newly acquired engineering skills and found a local studio that allowed him to sleep in the backroom in return for his work. As an engineer, Question fine-tuned his musical knowledge, as well as his own skills.

He also began co-managing an act named Mojoe, a local hip-hop band( who is now signed to Mathew Knowles Music World record label). Utilizing his previously attained connections, including an internship with Raphael Saadiq, that he had done while going to school in California, Question began making waves with the band. "I still had a lot of industry contacts in place so we were just taking a lot of meetings,? he says. ?I really didn't know what I was doing but I did a pretty good job at faking it."

Then, fate intervened. ?I just happened to be freestyling and someone heard me and wanted to introduce me to Evan Bogart, the songwriter behind Rihanna's ?S.O.S.,'? he explains. Evan took an interest and took him to multi-platinum producer Jonathan ?Jr? Rotem (The Game, Rick Ross, Chamillionaire , 50 Cent). ?I told them I had no more real interest in being an artist anymore, But JR's manager Zach Katz told me I should really pursue a career as a rapper, and instantly got me in the studio, and soon enough I had recorded over 40 songs, and they in turn hooked me up with Jon ?Shipes? Shapiro of Cinematic Music Group,? he says. ?I instantly knew that Jon was the right person to be with because he had shown such an interest in what I was doing and we shared some of the same goals.?

The duo maintains a pretty interesting relationship to date. Instead of being simply business partners, ?Shipes? and Question place their brotherly bond over the toils of business and respect each other's opinions in both business and in music. ?Once someone else validated me as an artist it gave me a source of inspiration and I just went with it,? he says. ?I became a monster in the studio recording song after song. Now I that I am older I feel like even if this all falls apart tomorrow, it was worth the ride, it was fun, and it has given me some direction.?

In 2006, Question released his I Am Question mixtape, and gave it away for free via download on the internet. He followed that up with Neighborhood Disturbance, Midget in the Trunk, and Supply and Demand, and has appeared on mixtapes from Kay Slay, Big Mike, Evil Empire, The Empire, Chuck T,DJ Envy, Hevehitta and Tape Masters. He recently dropped Kush 2008, a double CD of all original material, and has already moved over 5,000 units of it independently. In addition, he's opened up for numerous acts such as Young Jeezy, Lil' Keke, and Paul Wall.