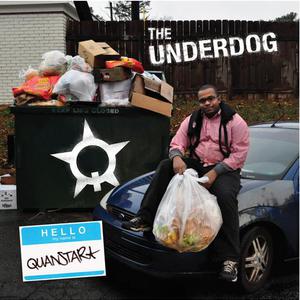 An emcee, publicist, self promoter, booking agent, movie producer, author, father, and visionary. The master planner and CEO of First Team Music, Quanstar aka Mr Blue Collar, lives by one motto: ?Work hard, and rest when I die?. The Compton, Ca native attributes his earliest exposure to hip hop culture to his cousin. It was through him that Quanstar found out about artists like Run DMC, The Sugarhill Gang, The Fat Boys, and Kurtis Blow.

The Compton, Ca native attributes his earliest exposure to hip hop culture to his cousin. It was through him that Quanstar found out about artists like Run DMC, The Sugarhill Gang, The Fat Boys, and Kurtis Blow. From there Beat Street, Breakin', and Wild Styles took over; however, the one single moment that made him a bona fide ?hip hop head? was seeing LL Cool J perform ?Radio? in the movie, Krush Groove. At that point he got it, and knew that's what he wanted to be.

In the years following, whether it was showing off his fancy footwork on cardboard, rhymin on the street corner about cars driving by, or taggin up his notebook in class when he should be listening to the teacher, Quanstar was completely immersed in hip hop culture. By the time he was 16, he was known as the fiercest freestyler in his neighborhood, and winning competitions all over the Los Angeles area.

In 2001, Quanstar along with Evaready RAW, whom he'd befriended at Clark Atlanta University, started the hip hop group and eventual band, First Team. After two successful independent releases and national tours, the band split and the two emcees founded First Team Music, the management company where he serves as the corporation's CEO.

Through FTM, Quanstar has released 4 solo projects, the hip hop film ?Do It!: Documentary?, the book ?Water From Turnips?, and embarked on eight national tours using ?The Bring Your 'A' Game Tour Series?. The Juice Crew, Akil The MC of Jurassic 5, Black Sheep, Immortal Technique, The Clipse, One Be Lo, and The Souls of Mischief are some acts that he's shared stages with.

Quanstar calls himself the American Dream, because he is a first hand example of what happens when you ?man-up, work hard, sleep as a hobby, then show someone else how to do the same?. His music, his work-ethic, and his ideology are reflections of growing up a ?back-packer? in the old school and making it happen in the now.

2: The Alias and Eardrumz Saga