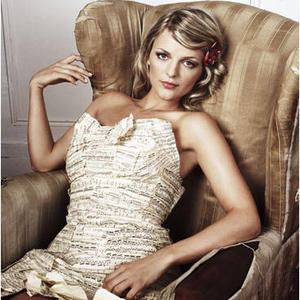 1) Amiel Daemion or just Amiel (born c. 1979) is an Australian singer who began her international singing career at age 9 with a haunting ecology song: "What About the Children?". She contributed the vocals for Josh Abrahams/Puretone's song, "Addicted To Bass" (peaking at #15 on the Australian Aria Singles Chart under the first name in 1999, and recharting in the top 100 under the second name with more remixes in 2002. This version also debuted and peaked at #2 on the UK Singles Chart.) She also contributed to songs on the Moulin Rouge soundtrack.

Her debut album "Audio Out" was released in 2003, and peaked at #17 on the Aria charts and went Gold. Three singles were released from the album- "Lovesong" (#6), "Obsession (I Love You) (#15), and "Tonight" (#64). Amiel received five Aria Award Nominations, including Song Of The Year and Best Female.

Her second album "These Ties" was released in Japan, but never officially released in Australia. The first single to be released was "Be Your Girl" available only by digital download. The next single was "Round And Round" peaking at #64 on the ARIA charts.

2) Amiel is also a guy from New Jersey who writes and produces an interesting kind of sunshine chamber pop. So far he has released three albums, Amiel (2000), Accidents by Design(2005), which is available to listen to on last.fm, and Figures Seeking Ground (2008).