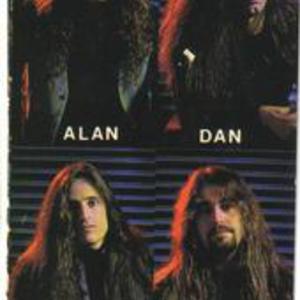 Non-Fiction started off as Dan Lorenzo, Mike Cristi, Damon Trotta on bass and Dan Nastasi on vocals. The "Green ep" came out in 1990 on the short lived Arena Records. Eventually Alan Tecchio moved back from Austin to replace Nastasi on vocals,Kevin Bolembach joined on bass. Non-Fiction signed with Grand Slamm, released the cd "Preface"...it went to 1 on WSOU. The band toured from Rhode Island to Texas. They then recorded "In The Know" for Grand Slamm/IRS records. The $17,000 video for the song "Reason To Live" received a few spins on MTV, the cd again made it to 1 on WSOU.

Non-Fiction headlined dozens of shows then toured as openers for Overkill in America from March 31st 1993 until the first week in May. Non-Fiction then left for Europe-this time as openers for both Overkill and Savatage from mid May until mid-June 1993. The last official cd was "It's A Wonderful Lie".