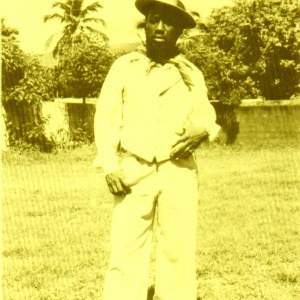 Three artists share this name: 1. Reggae singer from Jamaica mostly active in late 70s/early 80s Nicodemus (b. Cecil Wellington, 1957, Jamaica) came to notoriety as a DJ in the late 70's as deejay on the Socialist Roots Sound System alongside the famous selector Danny Dread. His family having musical ties previously as Nicodemus brother is Blacka Morwell of the Morwells. In '78 Prince Jammy connected him with the Tape-Tone Hifi which found great success when Nicodemus joined the sound.

The deejay won a strong following with his gruff voice that was in similar manner of Prince Far I or Prince Jazzbo but more in tune with rhythm riding younger deejay generation.

Nicodemus recorded several hits at Channel One and in '82 his first albums reached such as Gunman Connection (Cha Cha) where the title track was a sizeable hit, Dancehall Style (Black Joy), She Love It In The Morning (Hitbound) with striking cover art by Jamaal Pete and also the first part of Greensleeves DJ Clash series which he shared with Toyan.

The deejay would often be found featuring on sounds such as Virgo Hifi (a sound that he also would chat for in New York after it had migrated there in '82) and Jack Ruby's Hi Power.

The deejay was a popular all through the 80's recording what today are regarded as classic albums in the early 80's and also in the mid 80's for labels such as Skengdon.

Nicodemus would frequently travel to the US where he also recorded. A notable session of his earlier US-recordings is from a travel with fellow artists from Jack Ruby's Hi-Power in '83 - Bobby Culture, Louie Rankin, Brimstone & Fire. The result was the album Tidal Wave that featured an early version of Nicodemus PT. 109 that he would re-record in the mid 80's.

In '88 he recorded the album Cabin Stabbin with Supercat & Junior Demus which proved to be a success in the US.

He is also claimed to have helped Mr Bobby Konders (Massive B) start and build up his sound and label. Konders is one of the few lucky sound boys to have countless Nicodemus dubplates since he recorded quite some tunes with Nicodemus.

Nicodemus passed away the 26th of August in '96 after diabetes complications.

3. Progressive/gohtic metal from (Northern California) U.S.A
Nicodemus began in late 1998 as a project of American musician Christopher Morris. After graduating with two music degrees, he left failed bands behind and launched his own label, Dark Throne Music, to release his new work. In 2000 the debut Nicodemus CD "Tales of the Lovelorn & Necromantic" was released. Inspired by traditional, progressive, and European black metal, the album achieved critical acclaim for its original blend of musicianship and dark atmosphere. Compared to such metal heavyweights as Dimmu Borgir and King Diamond, the Nicodemus sound caught on with the metal underground and sales grew strong. Due to such demand, the album received distribution in thirteen countries giving the release international press attention and retail availability. By this time, Nicodemus had grown to include Andrew Greene on drums and Mathew McGee on lead guitar in the live and recording line-up. Buzz about the band continued to grow eventually catching the attention of Jeff Keller Management LLC (Black 'N Blue, Law And Order). In 2002, with a management team in place, Nicodemus signed with US based gothic metal label Dark Symphonies and recruited a second guitarist, Dave Peters. February 11th, 2003 saw the muchanticipated release of the "The Supernatural Omnibus".

Critical acclaim continued with the more melodic and progressive approach of the sophomore effort Radio play increased, mainly in Europe, and exposure through metal magazines and on the Internet grew exponentially. Drawing diverse comparisons to bands like Dream Theatre and RUSH, to Theatre of Tragedy and Tristania, Nicodemus was making an impact. Looking for a stronger presence outside of the US, the band immediately began writing new material with a focus on attracting even more attention from the stronger European market. With more focused songwriting and even stronger progressive arrangements, the band left Dark Symphonies and sought a European label for its new home. Winter of 2004 saw the signing of a worldwide deal with Greek metal label SONIC AGE RECORDS.
STATUS: SPLIT-UP