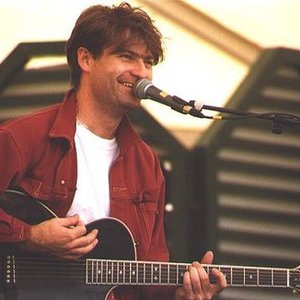 Son of the legendary folk/blues singer-songwriter Roy Harper, Nick Harper has forged his own way ahead to become recognised as one of Britain's finest acoustic singer/guitarists. Having played the guitar from the age of 10 (he is completely self-taught) and surrounded by the likes of Keith Moon, Jimmy Page, Robert Plant and David Gilmour during his early years, it was no surprise when Nick made his recording debut on his father's Whatever Happened to Jugula? in 1985.

Nick's talent and energy entranced Roy's fans and it was inevitable that he would begin touring and recording in his own right. The 1994 EP Light at the End of the Kennel was swiftly followed by his powerful 1995 debut album Seed prompting The Independent to describe him as "hugely talented".

A meeting with Squeeze frontman and songwriter Glenn Tilbrook in 1996 led to his playing with and supporting Squeeze and being signed to Tilbrook's own Quixotic label. Following tours in the UK, USA and Japan, Nick recorded the 1998 album Smithereens with Tilbrook as producer. This album and subsequent 40 date solo tour, including dates in New York and Glastonbury, confirmed Nick as a formidable talent in his own right. He teamed up with Tilbrook again on 2000's highly acclaimed album Harperspace.

To call him a superlative singer/songwriter could put his highly lauded guitar talent in the shade, and to call him a guitarist's guitarist might slight his distinctive, soulful voice and passionate songs. Not forgetting the wild ride that is one of his live shows ? from personal introspection to biting political satire via a charmingly caustic wit that would make Groucho Marx proud. To see Nick Harper live (with a style that combines a multitude of musical influences from folk to rock, classical to flamenco) is an unforgettable experience, where no two gigs are the same. His own material is frequently accompanied by segued offerings from Jeff Buckley, Blur, Led Zeppelin, The Prodigy; a little Zappa here, a touch of Monty Python there (and even a few bars of Kylie) are liable to be thrown into the mix of a two-hour set - that's when he's not walking across glass-littered bartops or never dropping so much as a single note as he re-strings his guitar, mid-song.

His 2006 album Treasure Island attests to his ability to craft songs that take in, absorb and spit out coruscating political scorn (as on the tracks Knuckledraggers and Sleeper Cell), social history comment (the title track being inspired by an obscure Liverpudlian philanthropist who employed men returning from the Napoleonic Wars to dig tunnels), the seven ages of man (in the infectious melody of By My Rocket Comes Fire), pride in his country (A Wiltshire Tale is an epic poem to his beloved home county), and turn them into catchy, robust tunes that grab the ear and remain in the memory long after the last track has ended.

During 2006 he played a series of festivals around the country, including acclaimed sets at the Moseley Folk Festival (Birmingham), JerseyLive (Channel Islands) and Beautiful Days (Devon), and playing live in session on Janice Long's Radio 2 show, prompting her to describe him as ?absolutely astonishing?.

2007 proved to be one of his most creative and successful years to date. Alongside live sessions for Charles Hazlewood on BBC Radio 2, Radio Wales, Scotland and a further session on BBC Radio 2 with Janice Long he released the long-awaited DVD, Love Is Music: a collection of live performances, interspersed with insights from friends, family and fellow musicians.

May 2007 saw the iTunes download release of his first single "Blue Sky Thinking", taken from the new album Miracles For Beginners. Reaching no. 1 in the iTunes chart[citation needed], it received favourable reviews and radio airplay across the UK and Europe. All proceeds from the single going to the Love Hope Strength Foundation.

In early 2007, a call from Mike Peters of Welsh band The Alarm was to lead to his involvement with the Love Hope Strength Foundation, a cancer charity co-founded by Peters and James Chippendale to provide a global support network for cancer survivors.

After taking part in Snowdon Rocks in June 2007, a climb up Mt. Snowdon with a gig near the summit, he then went on to be part of a 38-strong team of musicians including Glenn Tilbrook, Mike Peters, Billy Duffy (The Cult) and Jimmy Barnes, mountaineers, cancer survivors and those whose lives have been affected by cancer, who took part in a 14-day trek and acoustic concert at 18,500ft at Base Camp Mt Everest in aid of the Foundation in October 2007. The Everest Rocks trek culminated with a grand finale concert in Kathmandu on October 29 and raised more than US$250,000 for the only charitable cancer hospital in Nepal, situated at Bhaktapur (approx. 10 miles east of Kathmandu). Alex Coletti (producer of MTV's Unplugged series) filmed the trek for a documentary, Everest Rocks, which premiered on the Palladia channel on September 7 2008 and also released on DVD,

His sixth studio album, Miracles For Beginners, was released in June 2007. A ten-track album of love songs, witty parodies and social and political comment, including "Field of the Cloth of Gold", a track that refers to a meeting of the kings of France and Spain 500 years ago, with a parallel reference to today's music festivals), "Evo" (inspired by the Bolivian president, Evo Morales), the quirky "Simple", and "Blue Sky Thinking", a heartfelt ballad on a theme of 'looking outside the box'.

With 6 studio albums, a double live CD and 2 EPs (including Instrumental, a stunning display of his guitar talents) under his belt, Nick's work is as fresh and as vital as that of his first solo release fourteen years ago.

Following his 25-date Dig On Down UK Tour during February/March 2008, which took him across the country from Penzance to Glasgow, he played a number of UK festivals, as well as a series of open-air dates as special guests to the Levellers (including a duet with Levellers' vocalist/guitarist Mark Chadwick of Roy Harper's Don't You Grieve during Nick's set at Beautiful Days). During 2008 he was also asked to work with Dizzee Rascal for a live session recorded for Jo Whiley's Radio 1 show.

2008 ended with an appearance at London's Royal Albert Hall on September 27 2008 (where he introduced his 12-year-old daughter Lily on stage at the end of the set to accompany him on Crosby, Stills, Nash & Young's Our House ? as he had done with his own father Roy some 35 years before on the same stage), and a series of live shows in Norway and Italy in November.

In October 2008, Nick together with Mike Peters and a group of musicians and 55 cancer survivors and supporters, raised over $100,000 to purchase much needed cancer screening and treatment equipment for local cancer hospitals in the Andean region during a 10-day Inca Trek Trail from Cusco to Machu Picchu, Peru. Along the way, the participating artists jammed for locals, before playing a benefit concert in Lima on the last night. A documentary film and DVD will follow during 2009.

Following his 25-date Dig On Down UK Tour during February/March 2008, which took him across the country from Penzance to Glasgow, he played a number of UK festivals, as well as a series of open-air dates as special guests to the Levellers (his own set at the Beautiful Days festival included a duet with Levellers' vocalist/guitarist Mark Chadwick of Don't You Grieve). During 2008 he was also asked to work with British grime artist Dizzee Rascal for a live session recorded for Jo Whiley's BBC Radio 1 show.

Nick appeared at London's Royal Albert Hall on 27 September 2008, where he brought his 12-year-old daughter Lily on stage at the end of the set to accompany him on Crosby, Stills, Nash & Young's "Our House" - as he had done with his own father Roy some 35 years before on the same stage.

In October, Nick, together with Mike Peters and a group of musicians and 55 cancer survivors and supporters, raised over $100,000 to purchase much-needed cancer screening and treatment equipment for local cancer hospitals in the Andean region during a 10-day Inca Trek Trail from Cusco to Machu Picchu in Peru. Along the way, the participating artists jammed for locals, before playing a benefit concert in Lima on the last night. 2008 ended with a series of live shows in Norway and Italy in November.

During 2009, Nick played at Celtic Connections in Glasgow in January before starting ?The 38' tour, covering 38 dates across the UK. During the summer of that year he performed in Norway, France and Italy before a series of dates on America's East Coast in September, returning to the US in November for a coast-to-coast tour with Cy Curnin of The Fixx.

In February 2010 he embarked on a UK tour to promote his forthcoming album, The Last Guitar.

His first release since his 2007 highly acclaimed Miracles For Beginners, The Last Guitar combines the best of Harper's acoustic wizardry, along with his renowned acerbic lyrics and heart-rendingly soulful vocals on 12 neatly packaged tracks that range from the blues-driven One Of The 38, inspired by his first mountain trek in 2007 to Mt Everest with the Love Hope Strength Foundation, through to the up tempo and rocky title track, by way of emotive ballads such as Passing Chord, Freestyle and On. This album also marks the emergence of the third generation of the Harper family, with the introduction of his 13-year-old daughter Lily taking over vocals on Silly Daddy.

The tour and album are a prelude to his return to the Glastonbury Festival Avalon stage on June 26 2010.

Later in 2010, he will once again undertake further charity commitments with the Love Hope Strength Foundation, with a planned fundraising effort in Japan.