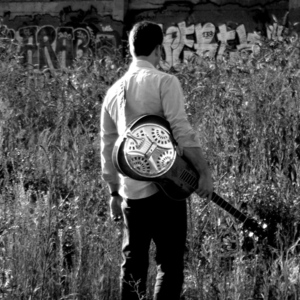 NATHAN WADE grew up in a small Indiana town where churches and cornfields crowded the landscape and funnel clouds would drift along the threatening sky. As a teenager, Nathan dusted off his grandfather's old National guitar, hidden away in the family attic for decades, and began devoting long days and nights to making music. Many bands and many songs later, his travels would take him to Seattle, the city he now calls home.

Under the influence of Nick Cave, Chris Whitley, and the field recordings of Alan Lomax, Nathan began creating his most personal music to date: dark songs haunted by religion, murder, and morality that use early folk and blues music like a canvas, painted thick with shades of his Midwestern upbringing and deft touches of gospel-inspired language.