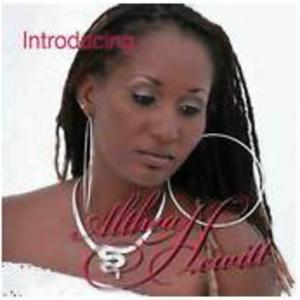 Having signed a lucrative three album deal with one of the world's largest distributors of Jamaican recorded products, VP's Records International (New York), Althea Hewitt has completed her debut album. Althea started performing in her father's band (he plays the guitar) long before her teens. She grew up to represented her high school, Camperdown High in the Teen Star Search Competitions that took place during the 90's. This was a talent competition that turned out many Jamaican recording artists.

Althea started performing in her father's band (he plays the guitar) long before her teens. She grew up to represented her high school, Camperdown High in the Teen Star Search Competitions that took place during the 90's. This was a talent competition that turned out many Jamaican recording artists.

For a number of years Althea also modeled the creations of many Jamaica's fashion houses. Oh yes she can really sing, dance and perform. She sang backup harmony in the recording studio and on stage for a number of recording artists including Bere Hammond, Boris Gardiner, Dwight Pinkney, John Holt, Garnet Silk, Norris Man, Bush Man, Richie Spice, Colin Levy and Chrisinti. She also sang background harmonies for Chaka Demus and Pliers and worked with Sony Records recording artist, Jamaica's Diana King. Althea and Diana King opened for American Rhythm and Blues Singer Jeffery Osborne when he performed in Jamaica.

In 2005 she performed in Cayman with Pluto Shervington, Boris Gardener, Ernie Smith, Dwight Pinkney and some of Jamaica's best musicians.

Althea has recorded for well-known record producers like Fattis Burrell and Donovan Germaine. She also did the vocal lead on Mr. Vegas' popular recording of ?Juicy' and sang jazz at the Ritz-Carlton in Rose Hall, Montego Bay, Jamaica. At the Ritz-Carlton she was to do one night of jazz, this ?one nighter' lasted a year and a half

In 2003 Althea toured Europe successfully with Bushman and most recently in June 2005, she toured Australia and New Caledonia performing with Max Romeo and the Third World band.

Because of her reputation for always doing classy and stellar performances, Althea was chosen by the Jamaica Tourist Board and the Jamaican embassy in Brussels to do a two and one half week tour of Brussels, Belgium.

Most recently Althea was asked by the one of Jamaica's schools to make presentations to the girls who attended the school. She was chosen as the school saw her as someone that the girls attending the school could emulate. She performed on their ?All girls' day' and was later asked to return to read to a number of classes in the school on a day called ?Reading Day'.

On commenting on the direction of her debut album she said, ?First as a young upcoming artist, I would like to pay respect to other female Reggae artists like Phyllis Dillon, Marcia Griffiths, and Cynthia Schloss. Because of this I am thinking of including some of their work on the album. I feel that I have a responsibility to set a positive example, so when composing my lyrics I would like to cover subject matters concerning the affairs of women?. She went on to say, ?By concerns I mean how other female artists have had to survive in the music business. By concerns I mean how we as female artist see our communities and the children in those communities. By concerns I also mean how we inter-react with the men in our lives?

Her recording of the Patti Drew/Phyllis Dillon classic ?The love that a woman should give to a man? produced by John Alexander is getting great rotation on radio. Her video for the song, also produced by John Alexander and directed by ?Where it's at? Alphonso Walker, can be seen on cable television and should hit mainstream television with in a week