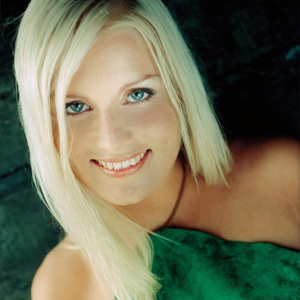 In The Beginning
Linnea Handberg was born in the city of Copenhagen, Denmark on 22nd October, and raised in the UK. She is currently living in Copenhagen.

Linnea has always been interested in music, ever since she was young. It was no surprise then when, in the early 1990s, she began her career as a recording artist, signing up with record labels "Maverick", "Warner" and "Scandinavian Records". It was in 1997, when famous bubblegum group Aqua was influencing musicians with their widely popular happy dance style, that Linnea decided to create a a bubblegum dance project, and sing music in the same happy style. Linnea, joining forces with producers "Honeycutt", called her project "Miss Papaya" after the sweet and exotic tropical fruit.

Surprising Success
The Miss Papaya project was intended to be very tongue-in-cheek, with extremely silly lyrics, catchy hooks, and child like concepts. At first the project was just a joke, and Linnea later admitted that "nobody expected Miss Papaya to get the success she did". In 1997, Miss Papaya released her first single "Jingle Bells". The single was a minor hit, but nothing overly encouraging. The producers decided they would release a second single, "Hero", an original dance song written by Linnea and Honeycutt. Much to everyone's amazement, the single was a huge success, and Miss Papaya was recognised as a bubblegum dance artist, with music in the same vein as Aqua.

Debut Album
Encouraged by the success of Hero, Honeycutt and Linnea began work on an album release. The result was "Pink", released in 1998, at the peak of bubblegum dance production. The album contained 11 super-sugary dance tracks, and one ballad (something that all bubblegum albums seemed to need). The album was an instant success, and Miss Papaya soon became a household name throughout Denmark. In 1998, Miss Papaya's single "Hero" was released in the USA, a feat that not many bubblegum dance artists manage. The single was very successful, and attracted the interest of many fans outside of Scandinavia. Madonna, whose daughter was a big fan of Miss Papaya, invited Linnea to America to see her child, and Madonna praised Linnea on her music writing.

While in America, Linnea was given a shopping spree, just in time for the new American music video for "Hero". Linnea later admitted that the shopping spree was one of the funnest things she has ever done, and it was a lot of fun picking out brightly coloured shoes and clothes for the shoot.