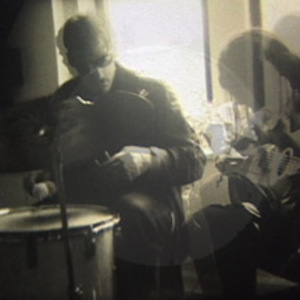 Meanwhiles is the brainchild of songwriter and multi-instumentalist Josh Allen. His songs may have been written in Brooklyn, but they do not belong to the city.. they are stories of heartbreak and heavy dreams, with the flicker and flash of modern life coloring their field of vision. Meanwhiles' sound contrasts Josh's raw acoustic guitar, vocals and self-reflective songwriting style with bleary-eyed layers of loops, finely crafted effects, organs, pianos, and the odd sample from the tv.

Josh is accompanied on record by his brother Todd, who adds phased out distorted bass parts and dynamic drumming, as well as Alan Weatherhead, producer/arranger extraordinaire (Sparklehorse) on pedal steel guitar, and Nadine Khouri who adds a subway tunnel echoed vocal to the haunting ?Dreams From the Underground'.

2003 was a turning point for Allen. He had drifted from his drummer and longtime comrade Jason Green (Hopewell) and been torn from his brother/bass player by Todd's ongoing struggle with drug addiction. He'd been disillusioned by offers given by record producers who wanted to reconfigure the sound of his songs? and had been kicked out of his Brooklyn loft and recording studio.

It's no wonder that the first Meanwhiles EP ?All This and Nothing' is at once a desperate, pleading call.. a longing for escapism, and a rumination on failed relationships and feelings of loneliness in a big city's whirlwind.

Alone with his songs for the first time, Josh began recording what would eventually become Meanwhiles debut CD ?The Nights Rewind' in a tiny bedroom.. playing all the instruments and creating layers of rhythm with salt shakers, over-amplified finger scratchings, and by banging on furniture and scrap metal.

Live shows featured Allen creating live loops of noise and note patterns, backed on occasion by his brother and other guest musicians. Periodically Josh would be joined on stage by Martha Wainwright, who at first would lend her sweet, earthy voice to end-of-the-set cover songs such as the Boudleaux Bryant classic ?Love Hurts'. She would eventually come to record harmony vocal parts on the two Nights Rewind tracks, ?Long Walk Home' and ?Middle of Nowhere'.

At a performance marking the release of ?All This and Nothing' at NY's Mercury Lounge, Meanwhiles' set attracted the attention of Sparklehorse/ Mary Timony producer Alan Weatherhead. Overjoyed by the prospect of working with Alan, Josh spent the rest of the year writing new music and transforming the EP into a full-length album. And, in early 2004 with a 9-day visit to Dave Lowrey's Sound of Music Studios, Weatherhead's touch at the control board brought the grace and power of a big studio sound to Josh's home recordings? resulting in the first Meanwhiles full-length record, The Nights Rewind.

A tour of the US began, stages were shared with everyone from Paul Kimble (Grant Lee Buffalo) in Seattle to Cheap Trick at NY's Virgin Megastore, and when The Nights Rewind was picked up by the German label Decoder, the touring extended to Europe and the UK, bringing shows with Dean and Britta, Hush the Many, Laura Gibson, Nadine Khouri among others.

In between tours during the summer of 2006, Josh began crafting what would become a second full-length record, ?Slow Motion Summer'. Another bedroom (a slightly bigger one) recording that combines a bare knuckled indie-rock approach with a sculpted studio vision. A pure cosmic sound, blending modern noise with older, more classic instrumentation.

The ?Slow Motion Summer' tracks find Josh digging bravely into bare emotion in his lyrics, and deeper into the American folk-country tradition with his melodies. His increased work and interest in the world of film scoring and sound design begins to make its way into the recordings, lending each mix its own landscape. Traditional song structures live side by side with subway car screeches and jingles from the TV.

In 2008, with some drum and bass help from his brother Todd, and long distance collaborations with Alan Weatherhead and Nadine Khouri, Allen completed the mixing on his finest effort to date, ?Slow Motion Summer'.

Josh Allen is currently working on a solo record and planning tours of the US, UK, and Europe.