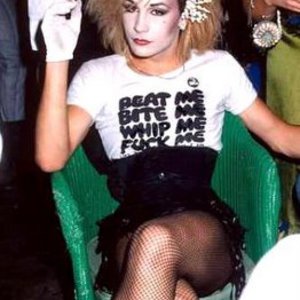 There are at least 2 musicians going by the name Marilyn. Peter Robinson (born November 3, 1962), better known as Marilyn, is a cross-dressing singer who reached fame with his song "Calling Your Name" in the 1980s. Marilyn was born in Kingston, Jamaica. He grew up in Hertfordshire, England as part of a musical family and was influenced by the songs of Barbra Streisand, Motown and gospel. During his teenage years he began experimenting with his sexuality and image, adopting the blonde hair, makeup and movements of his idol Marilyn Monroe, hence his stage name Marilyn.

Peter Robinson (born November 3, 1962), better known as Marilyn, is a cross-dressing singer who reached fame with his song "Calling Your Name" in the 1980s.

Marilyn was born in Kingston, Jamaica. He grew up in Hertfordshire, England as part of a musical family and was influenced by the songs of Barbra Streisand, Motown and gospel. During his teenage years he began experimenting with his sexuality and image, adopting the blonde hair, makeup and movements of his idol Marilyn Monroe, hence his stage name Marilyn. Coincidentally Monroe died the same year Peter Robinson was born.

Marilyn was a part of the British new romantic movement which emerged in the late 1970s and was popularised in the early 1980s. Boy George and Marilyn were regulars at 'The Blitz' (regulars being labelled as Blitz Kids), a highly stylised nightclub in London run by Steve Strange of the musical group Visage, and a place which spawned many early 1980s pop stars such as Spandau Ballet. Essentially the new romantics based their image on the coolness of David Bowie and high fashion, and the music of David Bowie, Kraftwerk, Marc Bolan and post punk New Wave. Marilyn befriended Boy George through mutual friend, and former Blitz Kid Philp Sallon. Boy George and Marilyn moved into a squat in Kentish Town a suburb of London. They were soon chased out by the neighbour who tried to break down the front door with an axe. This was because Marilyn, who he assumed was a woman and was attracted to, was actually a man. According to Boy George, Marilyn was once known to slide on David Bowie's lap at a club called Legends and kissed his ear. Bowie ignored his pleas to seduce him. The Blitz Kids had found themselves bored with the whole punk genre and, in an effort to find something new, took to wearing bizarre home-made costumes and clothing and excessive amounts of make-up. They were often extremely androgynous in nature.

While Boy George went on to form Culture Club in 1981 and secure a recording deal with at first with Epic Records, then Virgin Records, Marilyn was still scouting for a recording contract. He teamed up with songwriter and pop entrepreneur Paul Caplin, with whom he co-wrote Calling Your Name, Cry and Be Free, You Don't Love Me and other songs. At this point Culture Club had made a commercial impact with their debut album, and record companies were seriously looking for artists with a similar cross-dressing image.

Following an appearance in the stylish video for Eurythmics hit single Who's That Girl which garnered him considerable press attention, Marilyn was signed to Phonogram Records and released Calling Your Name in November 1983. The song was an immediate smash, reaching #4 on the UK charts, #3 in Australia, and #1 in Japan. The lyrics to the song are reportedly based on an argument Marilyn had with Boy George. He also released Cry and Be Free and You Don't Love Me in 1984, with varying success. During a controversial promotional visit to Australia, Marilyn was involved in a fight in a Sydney pub and left the country with a black eye, calling Australians "animals". In November 1984, he took part in the Band Aid charity record project "Do They Know It's Christmas?" with various other musicians of the era.
Marilyn's d?but album Despite Straight Lines was released in June 1985, featuring his three previous hits and a new single, "Baby U Left Me (In The Cold)". The new single and the album were commercial failures in the UK, though found a modest audience in other parts of the world.

Despite the initial collaborations between Boy George and Marilyn, their on-and-off friendship became increasingly strained due to fame and drug-related problems. On July 9, 1986, Marilyn along with Boy George's brother Kevin O'Dowd were sentenced at Marylebone Magistrates Court on a charge of possessing heroin. The resultant media fallout of Marilyn's drug addiction and disputes with Boy George seriously damaged his public career. While attempting to record a follow-up album to Despite Straight Lines with famed producer Don Was in Detroit, Michigan, with little record company support, Marilyn's finances were drained to the point of having to work regular jobs outside of music. He briefly retired from the industry until 2001, when he made a series of successful Club PA's. He is still in demand for interviews and TV appearances.

The 2002 stage musical by Boy George, Taboo, features Marilyn and other stars of the 1980s. The music was a West End Smash before transferring to Broadway in NY produced by Rosie O'Donnell.

In 2006, Marilyn appeared in the UK Channel 4 documentary Whatever Happened to the Gender Benders?, in which he discussed his current mental health, his struggle with agoraphobia, and his fight against drug abuse.


Marilyn is also a punk influenced rocker from NYC who began performing in the 1970s. She was one of the underground stars of the fabled Mudd Club. The night after the Rock ?n' Roll Funeral Ball, she became the only act featured there regularly when Steve Maas, the club's brilliant owner, offered her an enormous sum to appear exclusively at the Mudd. At that funeral gala, Marilyn appeared in black silhouette with a Miss America banner draped across her body. Only instead of the usual beauty queen drivel, Marilyn's banner said Death. Armed with a two-foot hourglass, she sang Sex Means Nothing When You're Dead . Evidently, Steve liked what he saw.

Before striking out on her own, Marilyn had been the lead singer of Kongress, a band formed by Otto von Ruggins and Von LMO, who had already left to form his own band when Marilyn arrived.

Sex Means Nothing When You're Dead, Marilyn's first single, became an instant cult classic when it was released in 1980. Then came the EP So Disgraceful, released by Marilyn & the Movie Stars in 1982, which charted on Billboard . ?It all sounds a bit decadent but it's great,? is what Billboard had to say about So Disgraceful. Marilyn & the Movie Stars featured Webster Smith on synthesizers, drummer Hari Viderci, who also played for the Sickfu*ks, and bassist Tommy Victor, who went on to form Prong. She played the lead in Mark Kehoe's 1982 film, Destroy All Blondes. Marilyn also turned her mordant wit to writing?about subatomic particles, outer space, high-risk adventure, and the like?for New York newspapers and magazines, which came as a bit of a surprise to those who figured this blonde nightclubber had nothing between the ears.

Marilyn then went to Paris to perform and spent the next several years appearing in France, Switzerland, and Italy. She returned to New York to pursue her writing. Along with working for the rights of pedestrians and cyclists in New York, she's active in the civil rights movement for Ireland's men, women, and children still under the thumb of the British invaders who have oppressed that country for the last 800 years .

In 2002, Marilyn appeared in Ned Ambler's movie Illusions of Broadway, singing her incomparable I Survived. (No relation to the Gloria Gaynor song). She stars in Ned Ambler's new movie Astin Valentine: Unrestricted, which opened March 2, 2004 at Film Anthology Archives in New York City.

Marilyn has just released a CD, Sex Means Nothing When You're Dead, with the original versions of the songs she recorded in the early 80s. (To order, click the link at left)
She has a CD of all new songs coming out at the end of 2004

Despite Straight Lines: The Very Best Of