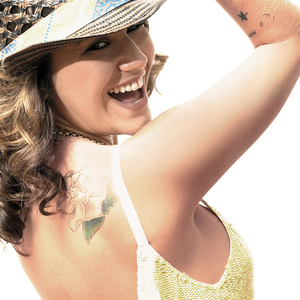 Maria Rita Mariano (best known as MARIA RITA) is a Brazilian singer, daughter of famed pianist/arranger C&eacute;sar Camargo Mariano and the late Brazilian singer legend Elis Regina. She was born in Sao Paulo, Brazil, on September 19, 1977. Maria Rita graduated in Latin American studies and communications in New York University, and worked as a journalist in a magazine for teenagers. Maria Rita began to sing professionally aged 24, even though she began to sing since she was 14.

Her first CD, 'Maria Rita', launched her career, with the first cut on her first album, "A Festa (The Party)", written by Milton Nascimento, a Brazilian singer-songwriter. The CD was platinum and was a hit worldwide. After that album she became an international star. Her mother's career as a renowned singer had a major influence in Maria Rita's life as a singer-songwriter; She was always conscious of being the single daughter of a great singer. Despite having her mother's vocal DNA, Maria Rita developed her own jazzy vocal style, influenced by singers, like among others, Ella Fitzgerald. She won the 2004 Latin Grammy Award for Best New Artist in the General Area. Her debut album, 'Maria Rita', won the Best MPB (Popular Brasilian Music) Album award of that year. Rita is pronounced "HEE-taaa".