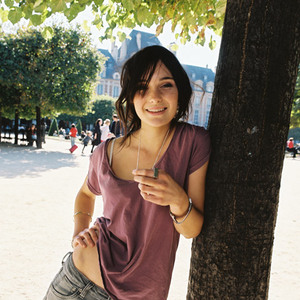 Lisa Helen Mitchell was born in England on March the 22nd of 1990, although migrated to New South Wales, Australia at the age of three. She is the eldest of two in a family which resides in the border town of Albury, Australia. Her musical journey began at age twelve when she started taking guitar lessons with a focus on rock and folk. Not long after, she fronted a cover band called Chrome - predominately playing in local cafes.

Her real exposure though came at the age of sixteen when she auditioned for Australian Idol. She quickly received high praise with one judge claiming that she was "the best thing musically that has ever came out of this country." While on the show, Lisa performed such songs as Collide, Diamonds On the Inside, Fall At Your Feet and Heart of Glass. Despite receiving positive reviews, Lisa felt vulnerable without her guitar providing solace.

Nevertheless, she was finally reunited with the instrument as she performed a rare track from Coldplay entitled See You Soon. Despite the pressure to perform it well, due to her growing reputation as an authentic guitar-playing songwriter ("reminiscent of an early Joni Mitchell"), she mesmerized millions with her enticing rendition. After two more performances, including an original entitled Too Far Gone, Lisa was ready to go her own way and that she did.

Soon after leaving the show, she was offered a couple of recording contracts but rejected the offers, claiming that such an album would be too manufactured. Instead, admirably, Lisa decided to continue developing her craft as both a performer and songwriter. She quickly built a grass-roots following after touring with Old Man River, as well as performing both at National Youth Week and on MySpace (four performances) to a viewership of over ten thousand. Her page has now received over three hundred thousand views. It was around this time that Lisa felt she was ready to sign with both Scorpio Music and Warner Music, and recently with Sony Publishing, all with the support of Dan Hume from Evermore.

On August 4th 2007, her first EP entitled Said One to the Other was released, which included the tracks Slow and Incomplete Lullaby. The EP debuted at number 27 on the ARIA charts and number 1 on the Australian iTunes chart. Of late, after putting school on hold temporarily, Lisa has been touring with the likes of Sparkadia, The Hampdens and Evermore, with an upcoming tour supporting Ben Lee. She has also expressed interest in producing another EP in the future.

Lisa is currently on a tour of the eastern states of Australia. Much to the chagrin of fans from her home town of Albury-Wodonga, Lisa has decided to leave her home town off the tour in favour of larger cities.

Welcome To The Afternoon (EP)