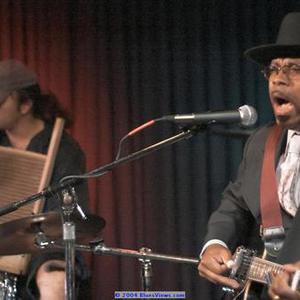 Early Adulthood - After Graduating from Clarksville High School in 1975,Enlisted in the US NAVY SUBMARINE SERVICE. In 1980,KM Was Converted to Christianity and in his own words "Received Divine Inspiration and Abilities" to compose and play Blues and Spirituals on guitar,primarily and secondary, the harmonica.In 1995, KM became and Ordained Minister in the Church of God in Christ(COGIC). Shortly after accepting this calling;He lost his job and His marriage fell apart. Unable to maintain support for his family; his first family left him. KM then begin taking on temporary work assignments to survive.In 1996 ,he started a subcontracting business during the day and started a Chicago/Delta Blues band at night called "KM WILLIAMS AND THE BLUES TRAIN", developing his signature Texas/Mississippi guitar/vocal style and honed his songwriting abilities. They Released on Album called "ROLLIN' AND TUMBLIN'" and opened for major Blues and Gospel acts that passed thru Cleveland including ROBERT LOCKWOOD JUNIOR, LITTLE MILTON, THE HOLMES BROTHERS and THE FIVE BLIND BOYS OF ALABAMA. KM Continued to preach in the streets of Cleveland and various Churches that would have him. BACK TO TEXAS AND FAME - In the fall of 1998, KM again fell upon hard times when gigs got sparse and his subcontracting business not making much money. Unable to make ends meet; He relocated , with the help of his Mother, back to Texas in early 1999, first to Clarksville, then to Dallas,A Chance meeting and ON-air Radio Show performance on KNON RADIO 89.3FM with Blues DJ DON OTTERMAN(known as Don O") convinced him to record a CD of original songs. That First CD was entitled "THE REVEREND OF TEXAS COUNTRY BLUES"(2000) and received international acclaim and rave reviews from both LIVING BLUES and BLUES REVUE Magazines for Its authentic gutbucket Texas/Mississippi Country Blues/Spiritual style that revists the styles of BLIND LEMON JEFFERSON,LIGHTNING HOPKINS and BLIND WILLIE JOHNSON. In 2001 a second CD entitled(SANCTIFIED BOOGIE" further merged his style with the Country Boogie style of JOHN LEE HOOKER and received another rave review from LIVING BLUES magazine.Since then KM has Performed nationally and internationally at various clubs and festivals, and released fourteen more Solo CD's,three DVD'S(including an auto biography filmed and directed by BILL FOUNTAIN in 2004 also entitled "SANCTIFIED BOOGIE" from LEVEL GROUND FILMS) and 4 CD's under a partnership with Texas Washboard player and percussionist WASHBOARD JACKSON called "TRAINRECK", whose sound merges KM Williams' Texas/Mississippi Country Blues into a more Electric,Driving Trance Blues and North Mississippi Hill Country Boogie similar to T-MODEL FORD,RL BURNSIDE and JUNIOR KIMBROUGH.[img]http://www.sonsofthedelta.co.uk/Images/trainreck.jpg[/img]