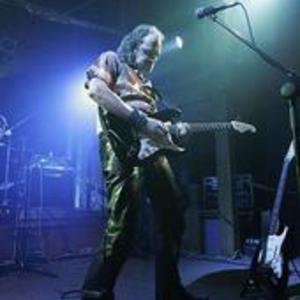 Keith Thompson is a professional musician with many years of performing experience. He has worked in several bands and as a solo artist. He has travelled extensively in the UK as well as in European countries such as Germany, Switzerland, Austria, Denmark, Holland, Poland and Norway. Recently Keith also did a promotional tour in the USA. When not touring or playing live, Keith has been in demand as a session musician in the studio.

His guitar work has cropped up on several albums and as incidental music on television. A sample of Keiths guitar work can also be heard as the soundtrack for the best-selling computer game, Grand-Prix 2. Keith also writes songs and music for other artists and musical projects. He has added his skills on stage or in recordings to projects by Spooky Tooth, Steve Winwood, Ruby Turner, Wurzel from Motorhead, Dave Markee and Henry Spinetti (Eric Clapton Band and Tina Turner) Greg Ridley of Humble Pie, Luther Grosvenor of Mott The Hoople and many others. Line- Up! These days Keith works with a pool of highly talented musicians depending on availabilty but the regular band is as follows: On bass guitar: Neil Simpson. Neil is a regular member of legendary Climax Blues Band, has also performed with John Mayall, Peter Green, Ruby Turner and Roy Wood. He is joined by Roy Adams on the drums, also from Climax Blues Band. He was originally with Steve Gibbons Band and has played with Ruby Turner, Roy Wood and many others. A bit of extra spice is added to the line-up in the form of Patsy Gamble on saxophone. Patsy is part of one of the UKs finest brass sections, The Little Big Horns. She recently performed with Mick Jagger on his latest solo album, Goddess In The Doorway. She has also performed with Steve Winwood, Eddie Martin and Ruby Turner.

Out Of The Smoke