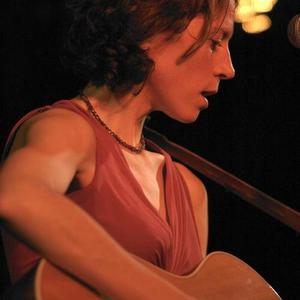 Recently debuted on the Bay Area's KFOG commercial radio and selected by About.com as a Best Unknown Folk Artist, Kate Isenberg is gathering a buzz that promises wide renown for the San Francisco?based singer-songwriter. Kate's folk-pop songs evoke the soulful vocals of Suzanne Vega and the infectious riff-hooks of John Mayer, with lyrics in the tradition of Joni Mitchell's: subtle storytelling, with insight and humor as dual themes.

Already well respected in the Bay Area's songwriting scene, Kate stepped onto a larger stage with her second CD, THE TIME COMES ON HUMMING TRACKS, which was recently announced as a finalist for Best Female Singer-Songwriter Album of 2007 by the Indie Acoustic Project (a contest whose past winners include Vienna Teng, Allison Krauss, and Greg Brown). Chronicling the pitfalls and transcendence of city life and love, the record moves smoothly from loss to laughter like a streetcar gliding through San Francisco's hilly neighborhoods. National magazines have taken notice of its ?impeccable songwriting? (?Performer) and ?exquisite production? (?Curve). Meanwhile, fans are crowding top Bay Area clubs for the dynamic pop of Kate's three-piece band, and for the vocal intimacy and guitar prowess of her solo performances.

As the vibration of rails signals an oncoming train, the buzz around THE TIME COMES ON HUMMING TRACKS announces a powerful arrival. More than just a girl with a guitar?or even a female guitarist who outplays many a male peer?Kate is a multi-instrumentalist and producer. She arranged and recorded the tracks for THE TIME COMES herself in her San Francisco home. Then, to mix the album, she chose Jon Evans, who drew on his work as bassist for Tori Amos and studio collaborator for several Grammy-nominated jazz composers to give the CD an atmospheric depth worthy of a prime-time audience. Listeners of KFOG's Acoustic Sunrise program, drawn in by the driving drums, bass, and mandolin of the CD's anthemic opener ?Streetcar to Grace,? have requested deeper cuts, such as the sparkly acoustic guitars and wistful lyrics of the show-stopper ?James? or the mournful, waltzing violin, banjo, and piano of ?Long Winter.? In live shows, Kate's veteran rhythm section (Aaron Brinkerhoff, drums; Fergus D. Lenehan, bass) brings the songs to life with professionalism and humor.

Born and raised in the Bay Area, Kate began studying classical violin at age eight. In her teens, she discovered the lyrically smart, melodic pop compositions of Brian Wilson, Paul Simon, the Police, and the Indigo Girls. In college at Harvard, while studying English and American literature, Kate taught herself guitar and began writing fiction, journalism, and memoir. Words and music came together after college, when she played top listening rooms on both U.S. coasts as part of the acoustic duo Vice Versa. By constantly reinventing her technical approach with alternate tunings and riffs as percussive as they are melodic, Kate has developed a guitar style that can tell a story as eloquently as her keenly observed, literate lyrics. Her debut solo album, CADUCOUS (2002), won accolades when its single, ?No Need,? was chosen for a compilation CD featuring top songwriters in the U.S., including Indigo Girl Amy Ray.

Kate is now at work on her next full-length album. Showcasing her new passion for electric guitar, a mature vocal expression, and her signature lyricism, the new record will announce a songwriting talent whose time has come.

The Time Comes on Humming Tracks