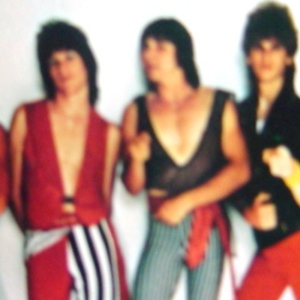 1) A Metal band from Montr?al, Qu?bec, Canada that release a mini LP in 1993 called "Time Has Come". 2) Norwegian veteran hiphop producer and MC. He started to rap in 1988. He has releasted 5 solo albums and produced several albums for Gatas Parlament but also for Wolverine, Definite, Apollo and lots more. Member of the Norwegian rap crews Alarmclock Connection and Gatas Parlament (from 2011). 3) German scenemusic composer

2) Norwegian veteran hiphop producer and MC. He started to rap in 1988. He has releasted 5 solo albums and produced several albums for Gatas Parlament but also for Wolverine, Definite, Apollo and lots more. Member of the Norwegian rap crews Alarmclock Connection and Gatas Parlament (from 2011).

5) Dutch New Alternative Rockband From Amsterdam, Startted around February of 2008.

6)Melancholy pop/rock ballads combined with ethereal landscapes and beautiful melodies. Just one of the many ways to describe the 'hard to define' musical style of Auckland band Jester. Currently on release from Auckland 4 piece Jester is 'Enemy', an immediate, radio-friendly NZ On Air funded single.

Produced by Shane Mason at Beaver Music 'Enemy' landmarks a rhythmically stronger, musically fuller direction for original members John Barker (vocals/guitar), Jared Kahi (guitar/vocals) and Mark Grimes (bass) since the addition of Greg Dempster on drums at the end of 2001.

Jester have developed a remarkably intuitive melodic sound that has generated NZ On Air Phase 4 support for music and video funding.

Exhorting a DIY ethic that showcases the bands' diverse talents and interests, Jester's singles to date have been accompanied by self-produced videos which have played extensively across the networks and Juice TV. Jester have extended their television influence further by providing title music to TV3's successful 'Being Eve' show, (last year with the single 'Fries With That', and this season with the as yet unreleased 'Mike's Guide'). Continuing on the TV theme, singer/songwriter John Barker appears in a feature role in the forthcoming series of 'Mercy Peak', to numerous TVCs.

A D.I.Y band at heart, a large portion of Jesters music is recorded in the comfort of their own home studio, including the song 'Fries with That' which was chosen to be the main song for the soundtrack of the T.V show Being Eve. Jester have recently made a second contribution to the shows soundtrack and will be releasing the song and it's video in conjunction with the start of Being Eves second serie

Here ye, here ye! Welcome to the show! Introducing the man of the hour...Jester!
If you look up ?Jester? in the dictionary the definition will read ?entertainer? and that ladies and gentlemen is exactly what he is. With his cool, calm and collected presence, Jester draws on a wide range of musical moods and influences in order to convey his light hearted and humorous side while also managing to maintain a level of depth which gives his music a lot of substance.

From a very young age Jester was drawn to both poetry and music. He enjoyed the way a rhythmic flow of words would compliment a solid beat. At the age of 15 Jester decided that his purpose was to create music which was dynamic and unique.
Since then Jester has been a busy man fronting the hip hop group O.Z Connect as well as writing his own tunes whenever he can. It seems that wherever he performs and in whatever line up this young man attracts attention from a wide range of people. Jester's life and his surroundings are his main source of inspiration. He has seen his fair share of ups and downs. Throughout all of his experiences Jester's music has remained a vehicle for his own self expression and artistic nature.
Jester recently moved to Newcastle to get a fresh start on life and music. After nearly 12 months away from the studio he has teamed up with S&M Productions to record his latest EP titled ?Rhythms & Rhymes? which is now complete.
This young, daring to be different, happy go lucky, passionate MC is sure to turn many heads because, as he will show you, only the sky is the limit.

Tales From The Boogieman