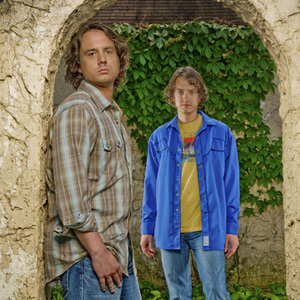 Although they were raised on the family ranch in Florida, neither Jesse nor Noah Bellamy had aspirations of being a cattle rancher. Jesse relates, "We converted an old hay barn into a studio, that's where we rehearsed and eventually began recording our first demos." It didn't hurt that their father, David Bellamy of the Bellamy Brothers, was there along the way encouraging and fostering their talents.

The brothers started touring the East Coast and throughout the South, playing everything from state fairs and music festivals, such as South by Southwest, to clubs as diverse as Tootsie's Orchid Lounge in Nashville, CBGB, the underground rock haven in New York City, and Billy Bob's in Fort Worth. Working on the road gave them the opportunity to play before large and small crowds alike and test their music on the public. They sharpened their songwriting by making frequent trips to Nashville and networking with some of the city's best songwriters and learning the tricks of the trade.
Internationally, Jesse and Noah have toured Europe where they performed at festivals in Switzerland, Norway, Sweden, Denmark, Germany, Wales, and the United Kingdom - delighting audiences with their unique country-rock sound while receiving rave reviews and significant international airplay along the way. Jesse even earned his first gold record in Denmark after his composition "You're the World" was recorded by Danish singer Wenche Hartmann on her 2007 release Here I Am, an album that features such notables as Albert Hammond and Billy Swan, as well as the Bellamy Brothers.
Two of Jesse and Noah's self-produced singles from their 2008 album Nowhere Revisited?the friendly warning "Daddy's Got a Shotgun" and the rambunctious "Wild and Willin'"?reached the Top 20 on the Texas Music Charts and Texas Regional Reports.
Jesse and Noah's latest album, Landfall, will be released by Luna Chica Records International in the fall of 2010. Self-produced and recorded at the duo's studio, Landfall reflects the best of Jesse and Noah's storytelling lyrics, brilliant solos and outstanding harmonies.