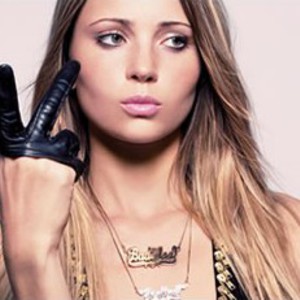 Chapman was born in a caravan in Woking to a Romani family. She grew up in West Molesey, Surrey, alongside 13 brothers and sisters. By the age of 16 she had had several jobs and was working illegally in Miami. By seventeen she had moved to work in London and got her first record deal at 19 years old. After a heavy advertising campaign on television and features in various UK music magazines, (notably NME), her debut single "Bad Ass Strippa" was released in the summer of 2004.

After a heavy advertising campaign on television and features in various UK music magazines, (notably NME), her debut single "Bad Ass Strippa" was released in the summer of 2004. Heavily sampling an O'Jays classic, the song topped the Box charts for a week, but this did not translate into sales and ultimately it reached number 22 in the UK singles chart. Considering the heavy promotion, this was disappointing for Jentina's label and they quickly restyled her image and sound. Enlisting serial hitmakers Cathy Dennis & Greg Wells to write the next single, "French Kisses" was notably a more pop-oriented record. The single was released in the autumn of 2004, entering the chart at number 20. Jentina released another single after this in Italy only, "Mysterious". With little promotion, it reached the Top 30 in Italy. Her debut album Jentina was then released, again, only in Italy.

In 2005, Jentina was parodied in the underground diss song, "Sad Arse Strippa" by peer and rival, Lady Sovereign. In the same year however, her songs: "Bad Ass Strippa" and "Mysterious" gained huge worldwide exposure after featuring in episodes of CSI:NY. In 2006, "Mysterious" was heavily featured in MTV's DanceLife during the audition stages.

Jentina is working on a new album currently titled 'Grace' due out in late 2007/early 2008.