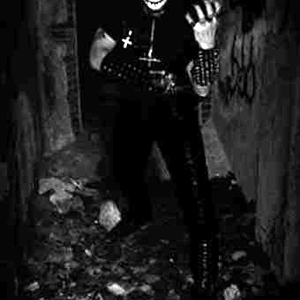 1. Black metal band from Spain (Barcelona). AKERBELTZ was formed from the beginning by Lilith & Akerbeltz. After a time, Lilith decided not to continue any more as the drummer of this band, and Akerbeltz continued the musical trajectory by him self, playing all the instruments. In October, XXXII anno SATANNA, this recording appears from the depths of an insane mind with rage and metal. This recording is an ode to the creatures of SATAN, and his followers, Nature's powers, and those whom take pervasion as a way of life, as long as there is a common accord.

In this recording they appear various session musicians such as Lilith, F?nebre, Isnack & Janis. In October XXXIII anno SATANNA, I enter the studio again to record ?A Wave Of Darkness?, this time with no session musicians, apart from the inimitable voice of Lilith, that appears in some macabre passages of the record. After a short time, Metal Millenium was interested and they edited this record. I've collaborated in the arising of the first Black Metal band that there has been in this country, BEHEADED LAMB? with the recording of a split Cd with the Finish band Azaghal released through Metal Millenium again. After a while I recorded Tabellae Defixionum and Akerhell, the both through Metal Millenium. After Akerhell was recorded I had the opportunity to release finally the demo ?Spreading the eternal mayhem? recorded in the '98 anno bastardi through Blut und Eisen, this time with two bonus track. Shortly after we released with Beheaded Lamb our full length Cd ?A Grave To This World?. After the Akerhell was recorded, Lilith formed HARRIDAN with which we recorded in the Redrum Studio the Lugubrious Necromancer demo and the Tales Of The Unholy, this one with the collaboration of Daemonus Von Anthian, former of Winter Frost that also had recorded previously the intro and the outro of the Akerhell; both the demos where released through my own label SATANIK RECORDS in Cdr, after a while Chaos Productions where interested in it and they also released them in tape; also the Australian label Smell The Stench released a limited edition? After this I recorded a split 7ep with the French band Armageddon though Chaos Productions. Shortly after the whole edition was out and we had to release it again through Undercover Records from Germany. In the 2004 Anno Bastardi I released the Never Deny From The Powers Of Sorcery Cd recorded with an 8track recorder through the American label Last Rights, the song from the 7ep was added to this work as we had a lack of recording time for it. In the 2005 Harridan was again releasing both the demos in a new format and this time with a bonus track and with professional cover and remastered through the Spanish label Oniric Records. In the 2006 I played live in Germany in the Under The Black Sun Festival with the Spanish band Amnion as session musicians. In the 2007 a 4way split Lp was released through the Spanish label Oniric records again with two tracks recorded in the Redrum Studio. In the 2010 "Infernuko Erreka" was released through Oniric records, this recording is original from the 2009. In the 2010 I recorded the "Ye elder sign" it's 4 tracks in a split with the american band Satanik Supremacy. This year I also recorded 2 more tracks that will appear in a worldwide split. I also recorded the drums for the french band Sale Freux (France). C/O: AKERBELTZ P.O. BOX 450 17310 LLORET DE MAR (GIRONA-SPAIN) E-MAIL: AKERBELTZWARHEADS@hotmail.com

A Wave Of Darkness