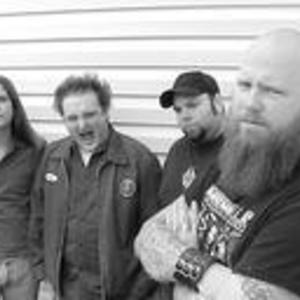 IRON GIANT IS A MACHINE.......a crushing , relentless , bulldozer of a band. The entensity of their live show is as legendary as their off-stage insanity , and , unlike most you should believe the bullshit. Returning in the spring of '06 with their second recording effort. The Giant is out to prove a point. With down tuned fury and blue collar frustration , they plan to show you that they fight and bleed for what they believe in , and few can match their blood and piss conviction while doing so.

IRON GIANT's Sabbath meets Motorhead monstrosity is the heaviest of the "Rock" with enough ball-rumbling groove to get the whole room goin. This is NO CLASS, HEAVY ASS , WHITE TRASH , ROCK-N-ROLL! In times of cookie cutter rock and here today gone today stars , IRON GIANT isn't a breath of fresh air....It's a booze soaked fist in the face. Tried , tested and all too true , this is the good shit that'll never get old. IRON GIANT has set their sights on '06 as " The year of the Giant " and that now you have been warned.