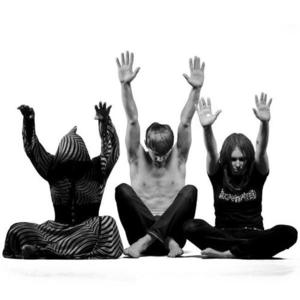 8) Invasion were a Spanish hardcore punk band from 2004-2008.
9) INVASION - Blazing death metal group formed in 1989 from the USA with 3 albums currently available.
10) Invasion is a hardcore band formed in Regina, Saskatchewan.


1) Invasion .London's Invasion are a heavy bass-less trio made up of two girls and one metal geek. They finalised their line-up in January 2007 and play short, fast, riff-based tracks with incredible vox to accompany an early 90's drunk-metal attack.

Invasion released their limited 4 track debut 7" EP 'Moongazer' in the summer 2008 (Run for Your Lives). Following two 10" releases in June ('Conjure War') and August 2009 ('Spells of Deception') Invasion released their debut album 'The Master Alchemist' (recorded and mixed in 5 days at Toerag Studios with James Shaw of Simian Mobile Disco) in November 2009. New material is due early in 2010.

"Invasion are pretty much the most exciting thing happening in UK metal right now: hell in UK music" NME

"An irresistable time-warp coolness and tunes so strong they could wrestle that bomb-resistant blob that destroys Manhattan in Cloverfield." Rock Sound

"...this band are the metal assault that will sweep away all in their path. Don't argue, just submit to the overlords, a new era is born." John Kennedy - XFM

"Invasion give heavy metal a good name once again, mining the pounding, grooving primeval seam which inspired the greats." Time Out

"With a White Stripes approach to rock (no bass, incredible interplay between guitar and drums) and some insane vocals, Invasion are a dirty, thrilling treat" Kerrang!


2) Invasion (Latvia). Invasion - a Latvian rock band. Invasion was formed in Riga in December 1995. Initially, the band played thrash/death metal with keyboards and female vocals. The first album, To The Eternity was recorded in 1996, and has become the most sold metal album in Latvia by that moment. Some songs from this album were included in Melna Piektdiena compilation of Latvian metal music.

A couple of years later, the band has changed its music style to groove metal/nu metal. As a result, the new album, Line Of Advance, was recorded in 1999. Invasion played a lot of gigs and festivals in Latvia and Lithuania.

After year 2000, Invasion disbanded for a different reasons, and reunited only in February 2007. Now they play a bit "softer" music, which might be called as "nu-rock'n'roll"

The new album "Made In Heaven" has been released on September 5th, 2008.

3) Invasion were a Swedish punk group that emerged in Swedish city of Sundsvall in 1979. First, they were called Edith Ronk. The group disbanded in 1980 when singer Hasse Zetterqvist and bassist Anders ?-hgren went on to form Fordringsfulla G?ster.

5) Invasion Mixing NY punk sneer with classic soul warmth, Swedish rockers Invasion were for sure one of the most self-willed and unique bands on the contemporary Swedish indie scene during the first few years of the 2000's.

The band's germination dates back to the late 90's, when singer/songwriter/guitarist Gustaf Jonsson and bassist/singer Johan H?lbling were in a noise rock constellation called Metal Machine Music (after an infamous Lou Reed album). When the group broke up, the pair continued playing. Meanwhile, Gustaf and class mate Clara Flygare, playing the drums, formed a band together with guitarist Martin St?hl of semi-famous indie sensation Looking for Nancy.

Eventually, the quartet decided to play together and in late 2003 they were known as Invasion. Some months later they released their first EP, blending Bacharach pop, mod, stax soul, country and r 'n' b.

In 2005 they released their full-length debut album, Invasion For Lovers, and the acclaim for the album and the unique peculiarity in the band's sound raised Invasion's profile considerably. Hailing from Borl?nge, a city famous for raising Sugarplum Fairy and Mando Diao, Invasion soon were called the next pop sensation from the harsh industrial community.

Early in 2006 the band released their second album, called Crazy Dance. Here the band proved to have a even wider spectrum of influences and combined vintage county with the rhythms of David Bowie's slick kraut disco. The band even recorded a cover of the Chuck Jackson classic Tell Him I'm Not Hom.

Some months later, in the autumn of 2006, Invasion dissolved. Difficulties to find time for and organise proper rehearsals was officially stated as the reason for the decision.

But at the turn of the year Jonsson, Flygare and H?lbling started to play together again and reformed as Love Attack. They are recording some of their first songs at this present.


10) Invasion-Regina, Saskatchewan A regina based group of 4, with one 7 inch, and a full length in the works. www.myspace.com/invasionsk

Wizards In Dub (With Shackleton)

Stand Against this world

How I Learned To Stop Worrying And Love The Madness